From EverybodyWiki Bios & Wiki
Jump to:navigation, search
This article is about the city in Florida. For the neighborhood in Los Angeles, see Hollywood.

Joseph Young arrived in South Florida in 1920 to create his own "Dream City in Florida." His vision included the beaches of the Atlantic Ocean stretching westward with man made lakes, infrastructure, roads and the Intracoastal waterway. He wanted to include large parks, schools, churches, and golf courses; these were all industries and activities which were very important to Young's life.[citation needed] After Young spent millions of dollars on the construction of the city, he was elected as the first mayor in 1925. This new town quickly became home to northerners known as snowbirds. These snowbirds flee the north during the winter and then escape the south during the summer to avoid the harsh climates. By 1960, Hollywood contained more than 2,400 hotel units along with the construction of 12,170 single family homes.[9] Young bought up thousands of acres of land around 1920, and named his new town "Hollywood by the Sea" to distinguish it from his other real estate venture, "Hollywood in the Hills", in New York. 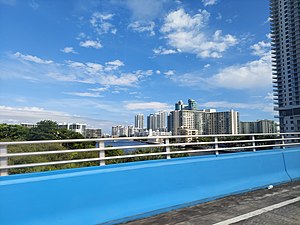 The skyline of Hollywood, Florida 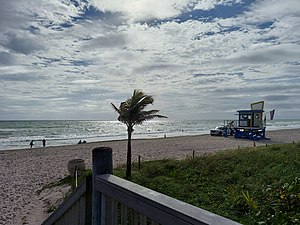 A photo of Hollywood Beach taken in late October 2020, during the COVID-19 pandemic

The Florida guide, published by the Federal Writers' Project, describes the early development of Hollywood, an early example of a planned community that proliferated in Florida during the real estate boom of the 1920s:

During the early days of development here, 1,500 trucks and tractors were engaged in clearing land and grading streets; two yacht basins, designed by General George Washington Goethals, chief engineer in the construction of the Panama Canal, were dredged and connected with the Intracostal Waterway. A Large power plant was installed, and when the city lights went on for the first time, ships at sea reported that Miami was on fire, and their radio alarms and the red glow in the sky brought people to the rescue from miles around. [10]

Prospective purchasers of land were enticed by free hotel accommodation and entertainment, and "were driven about the city-to-be on trails blazed through palmetto thickets; so desolate and forlorn were some stretches that many women became hysterical, it is said, and a few fainted.[10] Young had a vision of having lakes, golf courses, a luxury beach hotel (Hollywood Beach Hotel, now Hollywood Beach Resort), country clubs, and a main street, Hollywood Boulevard.[11] After the 1926 Miami hurricane, Hollywood was severely damaged; local newspapers reported that Hollywood was second only to Miami in losses from the storm.[9] Following Young's death in 1934, the city encountered other destructive hurricanes and the stock market crashed with personal financial misfortunes.[11]

Following the damage inflicted by Hurricane Irma in 2017, an initiative called Rebuild Florida was created by the Florida Department of Economic Opportunity (DEO) to provide aid to citizens affected by the natural disaster. The initial focus of Rebuild Florida was its Housing Repair Program, which offered assistance in rebuilding families' homes that were impacted by Hurricane Irma. The program priorities low-income vulnerable residents, such as the disabled, the elderly and those families with children under five.[citation needed]

Hollywood is in southeastern Broward County, and includes about 5 to 6 miles (8.0 to 9.7 km) of Atlantic Ocean beach, interrupted briefly by a portion deeded to Dania Beach. It is bounded by these municipalities:

These are the neighborhoods and communities that are officially recognized by the City of Hollywood.[29][30]

Hollywood has a tropical rainforest climate (Am), with long, hot, humid, and rainy summers and short, warm, and dry winters.

Prior to their dissolutions, Commodore Cruise Line and its subsidiary Crown Cruise Line had their headquarters in Hollywood.[40]

Aerospace and electronics parts manufacturer HEICO has its headquarters in Hollywood.[41]

Since 1991, the Invicta Watch Group, a manufacturer of timepieces and writing instruments, has had its headquarters in Hollywood where it also operates its customer service call center.

According to the City's 2019 Comprehensive Annual Financial Report,[42] the top employers in the city are:

Young Circle is another area surrounded by shops, restaurants, and bars. A Food Truck Takeover occurs every Monday, during which dozens of local food trucks park and offer a variety of cuisines including Cuban, Venezuelan, Mediterranean, Mexican, Jamaican, and Peruvian foods in addition to barbecue, burgers, gourmet grilled cheese, and dessert trucks.[43]

Hollywood Beach has a broadwalk which extends about 2.5 miles along the Atlantic Ocean.[7] Parking is available on side streets or in parking garages for a fee, and public trolleys run through the day.[citation needed] restaurants and hotels line the broadwalk along with a theatre, children's playground, and other attractions including bicycle rental shops, ice cream parlors, souvenir shops, and a farmer's market. The broadwalk is used for walking and jogging, and there is a bike lane for bicyclists and rollerbladers. 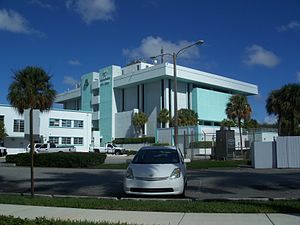 Hollywood is made up of 32 public and charter schools with 13 private schools. The public schools are operated by the Broward County Public Schools.[7]

Hollywood is served by Fort Lauderdale-Hollywood International Airport, the 22nd busiest airport in the United States.[53] Broward County Transit operates several bus routes that pass through the city of Hollywood, such as the 1 on US 1 (Federal Highway).[54] It is also served by Tri-Rail stations at Sheridan Street and Hollywood.

The city is protected by the Hollywood Police Department.

On May 2, 2016, the Miami Herald reported about "a man from Hollywood," James Muhammad (legal name James Medina), who planned to bomb a synagogue in Aventura, and who was recorded stating "Aventura, watch your back. ISIS is in the house."[62][63]

The television game show Hollywood Squares taped a week of shows at the historic Diplomat Hotel in 1987 and featured aerial footage shot over Hollywood, Florida.[64]

Episode 15 of Season 6 of the HBO crime drama The Sopranos featured scenes shot in the vicinity of the Hollywood Beach Marriott along Carolina Street.[65]

The Art and Culture Center of Hollywood is the exterior of the police substation in the now cancelled TV show The Glades.

Share
Retrieved from "https://en.everybodywiki.com/index.php?title=Hollywood,_Florida&oldid=1368943"
Categories:
Hidden categories:
This page was last edited on 12 February 2021, at 22:14.
Content is available under License CC BY-SA 3.0 unless otherwise noted.
This page has been accessed 400 times.
Privacy policy
About EverybodyWiki Bios & Wiki
Disclaimers