For the monotheistic religion founded in the United States and named after an alternative transliteration of the "Ik Onkār" phrase, see Eckankar.

Ik Onkar (Gurmukhi: ੴ, ਇੱਕ ਓਅੰਕਾਰ; Punjabi pronunciation: [ɪkː oəŋkaɾ]) - from Omkara - is the symbol that represents the one supreme reality[2] and is a central tenet of Sikh religious philosophy.[1][3] Ik Onkar has a prominent position at the head of the Mul Mantar and the opening words of the Sri Guru Granth Sahib.[3] Ik (ਇੱਕ) means one and only one, who cannot be compared or contrasted with any other,[4] (ਓਅੰਕਾਰ) is the one universal ever flowing divine melody and existential unstruck, never-ending sound of God.[5]

The sound is Oang (anhad naad) and Kar is the never ending continuation of Oang sound. This melody manifests in billions of galaxies and universes and leads to protect and preserve. Ultimately, everything gets merged back into this sound; this has happened countless times before.

It is a symbol of the unity of God in Sikhism, meaning God is One or One God,[6] and is found in all religious scriptures and places such as gurdwaras. Derived from Punjabi, Ik Onkār is the first phrase in the Mool Mantar referring to the existence of "one constant divine melody" which is proved by Gurbani itself in: <poem> ਓਅੰਕਾਰ ਏਕ ਧੁਨਿ ਏਕੈ।। Oangkar one and only divine melody ਏਕੈ ਰਾਗੁ ਅਲਾਪੈ।। One melody is tuned ਏਕਾ ਦੇਸੀ ਏਕੁ ਦਿਖਾਵੈ ਏਕੋ ਰਹਿਆ ਬਿਆਪੈ।। ਮਹਲਾ ੫ One is his land, one way he shows and that one is omnipresent. ਅੰਗ ੮੮੫ Page 885 (Shree Guru Granth Sahib Ji) ਓਅੰ ਆਦਿ ਸਰੂਪੈ।। ਓਅੰ ਗੁਰਮੁਖਿ ਕੀੲੋ ਪਸਾਰਾ।।</poem>[7] It is found in the Gurmukhi script[8] and is consequently also part of the Sikh morning prayer, Japji Sahib. It is a combination of two characters, the numeral ੧, Ikk (one) and the first letter of the word Onkar (Constant taken to mean God) - which also happens to be the first letter of the Gurmukhī script - an ūṛā, ੳ, coupled with a specially adapted vowel symbol hōṛā, yielding ਓ. 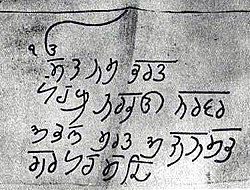 Punjabi: ੴ ਸਤਿ ਨਾਮੁ ਕਰਤਾ ਪੁਰਖੁ ਨਿਰਭਉ ਨਿਰਵੈਰੁ ਅਕਾਲ ਮੂਰਤਿ ਅਜੂਨੀ ਸੈਭੰ ਗੁਰ ਪ੍ਰਸਾਦਿ ॥
Simplified transliteration: Ik Oankaar Satnaam Kartaa Purakh Nirbhau Nirvair Akaal Moorat Ajoonee Saibhan Gur Prasaad
English: One universal Creator God who created the universe with the sound "Oang", Truth and eternal is the name, Creative being, Without Fear, Without Enmity, Timeless and deathless Form, Not affected by the circle of life and death - unborn , Self-Existent, He can be realized by the grace of the true and eternal Guru who has the power to enlighten us. [9]

The phrase is a compound of the numeral one (ik) and onkar, states Doniger, canonically understood in Sikhism to refer to "absolute monotheistic unity of God".[3] Ik Onkar has a prominent position at the head of the Mul Mantar and the opening words of the Sri Guru Granth Sahib.[3]

The Onkar of Sikhism is related to Om in Hinduism.[3] Some Sikhs disagree that Ik Onkar is same as Om.[3] Onkar is, states Wazir Singh, a "variation of Om (Aum) of the ancient Indian scriptures (with a slight change in its orthography), implying the seed-force that evolves as the universe".[12] Guru Nanak wrote a poem entitled Oankar in which, states Doniger, he "attributed the origin and sense of speech to the Divinity, who is thus the Om-maker".[3]

It is constituted of two components - Ek and Onkar. Ek means one, and is written as a numerical figure '1'. Onkar stands for the Primal mystical Divine Name of God referred to as Brahman in the Vedic literature. In order to grasp fully the underlying spiritual significance and meaning of Ek-Onkar each of its components needs to be studied in depth, beginning with Onkar.

The root of Onkar is traceable to the Hindu sacred syllable Om, also written as Aum. Historically, in the beginning, Om was used as a reply of approval or consent. It is equivalent to the English word 'Amen' uttered at the end of a Christian prayer, meaning 'so be it'.

At a later stage, with the evolution of Indian philosophic thought, the sages of Upanishads pronounced it as an adequate symbol of the Absolute Transcendent Reality, Brahman. It is considered as the unity of all sound to which all matters and energy are reduced in their primordial form, hence fit as a symbol for Atman (soul) or Brahman, the Supreme Being, which is the unity of all existence. These - and possibly some other - considerations led the Vedic sages to accord to Om the highest Divine reverence and worship. As a very sacred and powerful Mantra it forms part of daily worship and meditation by Hindu devotees. It is treated as the holiest symbol of Divinity calling it Nada Brahma or Shabda Brahma in the form of sound. Its nearest equivalent in the West is Logos or the 'Word'. St. John's Gospel expounds it thus:

Written in original, it is composed of three letters of Sanskrit alphabet, corresponding to A U M of English alphabet. According to certain interpretations, the three sounds represent three facets of Nirguna Parabrahm Paramatma - the One Formless Supreme Being. These facets namely are creation, preservation, and destruction. Symbolically, these different facets of the One are sometimes represented in the Sagun forms of Brahma, Vishnu and Shiva. There always is consciousness in Hinduism, however, that these forms are simply representations of the One.

Guru Nanak followed in the tradition of Nirguna Parabrahm Paramatma - One and Only One Formless Supreme Being, an Indivisible Entity. This belief in the unity of God he has re-iterated in various ways in his other compositions as well. At one place he emphatically affirms, Sahib mera Eko hai, Eko hai Bhai, eko hai.

So Guru Nanak's revealed Scripture place numerical figure '1' before Onkar thus enhancing his firm conviction in the unity of God. Its main importance and underlying significance lies in the fact that one is not represented by 'one' in words, but by a numerical figure '1'; thus completely eliminating any possibility of words being given different meaning. It was Guru Nanak's own inspired vision that transformed AUM into Ek-Onkar representing the Supreme Being, the Sole Absolute Eternal Reality which, while manifesting itself in multiplicity as Onkar, is still in its essence 'Sole and Absolute'; Transcendent as well as Immanent. Impersonal is also Personal in Ek-Onkar.

By the large, Sikhs worship 'Waheguru' as God's name for constant remembrance by repetition aloud or Sotto Voce. In Sikh parlance, this is known as 'Naam Simran'. There are, however, many a Sikh who also meditate upon and use Ek-Onkar for 'Naam Simran'. Like 'Waheguru' this is also considered to be a powerful Mantra for achieving spiritual progress and Divine Grace for final emancipation of the individual soul.

In conclusion, it can be said that Ek-Onkar is the true symbol of Sikhism given to us by Guru Nanak based on his spiritual experience and inspired vision at the very inception of the Sikh faith.

This article "Ik Onkar" is from Wikipedia. The list of its authors can be seen in its historical and/or the page Edithistory:Ik Onkar. Articles copied from Draft Namespace on Wikipedia could be seen on the Draft Namespace of Wikipedia and not main one.