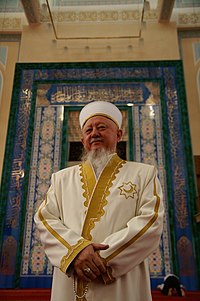 In Sunni Islam, an imam khatib (or just imam Arabic: إمام plural أئمة A'immah‎, Persian: امام‎) is a leader, often the leader of prayers in the masjid, and the Muslim community. This compound title is merely a common combination of two elementary offices: leader (imam) of the congregational prayer, which in larger mosques is performed at the times of all daily prayers; and preacher (khatib) of the sermon or khutba at the required congregational prayer on Friday. Although either duty can be performed by anyone who is regarded as qualified by the congregation, at most well-established mosques imam khatib is a permanent (part-time or full-time) position. He may be elected by the local community, or appointed by an outside authority—e. g., the national government, or the waqf which sustains the mosque. There is no ordination as such; the only requirement for appointment as an imam khatib is recognition as someone of sufficient learning and virtue to perform both duties on a regular basis, and to instruct the congregation in the basics of Islam.

Similar to spiritual leaders, the imam khatib is the one who leads Islamic worship services. More often, the community turns to the mosque imam if they have a religious question. In smaller communities, an imam could also be the community leader. The term is not to be confused with the use of Imams of Shi'a Islam, where it has a meaning more central to belief, referring to main leaders of the Shi'a community.

The term imam is also used for a recognized religious scholar or authority in Islam, often for the founding scholars of the four Sunni madhhabs, or schools of jurisprudence (fiqh). It may also refer to the Muslim scholars who created the analytical sciences related to Hadith or it may refer to the heads of the Prophet Muhammad's family in their generational times. In other words, Imam Ali, referring to Ali ibn Abi Talib, is a phrase commonly used by both Shi'a and Sunni Muslims, though with different connotations.[1]

Those who are considered imams in the context of scholarly authority by Sunni Muslims, are listed below:

Share
Retrieved from "https://en.everybodywiki.com/index.php?title=Imam_khatib_(Sunni_Islam)&oldid=907078"
Categories:
Hidden categories:
This page was last edited on 31 July 2020, at 07:28.
This page has been accessed 724 times.
Content is available under License CC BY-SA 3.0 unless otherwise noted.
Privacy policy
About EverybodyWiki Bios & Wiki
Disclaimers
Dark mode