Jarvis Mills (born September 11, 1983), better known by his stage name Jae Millz, is an American rapper from Harlem, New York,[1] who was signed to Lil Wayne's record label Young Money Entertainment and Cash Money Records.[2] His debut major label studio album, titled Nothing Is Promised was scheduled for a 2015 release.[3] Millz is known for participating in and a number of legendary rap battles with MCs such as Murda Mook, E Ness, 40 Cal. and JR Writer among others.[1][4]

Jae Millz was born in Harlem, New York. He started writing lyrics while at junior high school. He followed his love for art and went to the New York High School for Cartoon and Fashion Architecture.[5]

Millz grew to local fame by winning hip hop battles and doing performances and releasing a number of mixtapes. In 2003, he released his debut single "No, No, No", which received radio play and peaked at number 89 on the US Billboard Hot R&B/Hip-Hop Songs chart.[6] After the success of the song, Millz was offered a record deal with Warner Bros. Records. However, due to creative differences, he left the label, without having an album released. Soon after that he signed with Universal Records. Eventually, he left Universal, too, due to the lack of promotion, as the label was giving priority to other artists.[7]

Millz has released 20 mixtapes since 2004, including Back 2 Tha Future, Zone Out Season and Dead Presidents.[8][9] 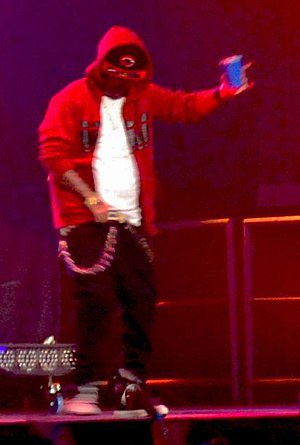 In January 2008, Millz was signed to Young Money Entertainment. He made a cameo appearance in the video for Lil Wayne's single "Lollipop" from Tha Carter III.[2]

On December 21, 2009, Millz' collaboration album with Young Money We Are Young Money was released. Millz was featured on eight of the songs, including the singles "Every Girl" and "BedRock". The album landed at number nine on the US Billboard 200, selling 142,000 copies in its first week,[10] and was later certified gold by the RIAA.[11]

Millz' debut album Nothing Is Promised is currently scheduled for a 2013 release. In an interview with BBC Radio 1's Tim Westwood, Millz explained that the title refers to his health problems – "The title come from [me] having two seizures in the previous year. I had them in my sleep. It's like you wake up and you don't know what happened."[12] The first single from the album, called "Forever Winning", was released in July 2011 and features fellow Young Money rapper Lil Wayne.[13] His newest mixtape Dead Presidents 2 was released on February 4, 2013. It got over 18,000 downloads in the first day of its release on the popular mixtape site DatPiff.[14]

On April 19, 2013, Millz released his 20th official mixtape Property Of Potentness 2, to celebrate 4/20. The tape features guest performances by Birdman, Gucci Mane and Smoke DZA, among others, and production from Harry Fraud, LoudxPack and Millz himself.[15]

In April 2010, Millz was arrested in New Jersey, while on his way to XXL's 2010 Freshman concert, where he was supposed to perform with rappers Cam'ron and Vado. He was detained for driving without a license.[16]

On May 18, 2010, Millz was arrested in Bronx, NY, for an alleged domestic dispute and for possession of an illegal substance.[17]

This article "Jae Millz" is from Wikipedia. The list of its authors can be seen in its historical and/or the page Edithistory:Jae Millz. Articles copied from Draft Namespace on Wikipedia could be seen on the Draft Namespace of Wikipedia and not main one.