John Phillip Stamos (Greek: Τζον Φίλλιπ Στάμος; /ˈsteɪmoʊs/ STAY-mohss; born August 19, 1963)[1] is an American actor, producer, musician, comedian and singer. He first gained recognition for his contract role as Blackie Parrish on the ABC television series General Hospital, for which he was nominated for the Daytime Emmy Award for Outstanding Supporting Actor in a Drama Series. He is known for his work in television, especially in his starring role as Jesse Katsopolis on the ABC sitcom Full House. Since the show's finale in 1995, Stamos has appeared in numerous TV films and series. Since 2005, he has been the national spokesperson for Project Cuddle.[2]

From 2005 to 2009, Stamos had a starring role on the NBC medical drama ER as Dr. Tony Gates. In September 2009, he began playing the role of Albert in the Broadway revival of Bye Bye Birdie. From September 2015 to 2016, Stamos starred as the lead character in the Fox sitcom Grandfathered. As of 2016, he is an executive producer of the Netflix series Fuller House, in which he reprised the role of Jesse Katsopolis. Currently, he stars as Dr. Nicky in the Netflix psychological thriller You.

John Stamos was born on August 19, 1963 in Cypress, California to William "Bill" Stamos, a restaurateur, and Loretta (née Phillips).[3] His father was of Greek descent, and his mother was of English, Irish, and German ancestry. He has two sisters, Alaina and Janeen.[citation needed]

In his youth, Stamos worked for his father's restaurants, and as a teenager had a job flipping burgers in the Orange County area. He attended John F. Kennedy High School and played in the marching band there. At 15, he attended his first Beach Boys concert; a huge fan, he would later tour with the band. His parents were supportive of his aspiration to be an actor, and although he planned to enroll at Cypress College for the 1981 term, he skipped his first semester to focus on launching a career as an actor—with his father's blessing. After just three weeks, he landed his first role on General Hospital.[4]

Stamos began his acting career with the role of Blackie Parrish on the soap opera General Hospital in late January 1982, for which he was nominated for a Daytime Emmy Award in 1984. That April, he went on to the lead role in the short-lived CBS sitcom Dreams, in which he played an aspiring musician in a band of the same name. Later, he played a cast role in the sitcom You Again? (1986) with Jack Klugman. 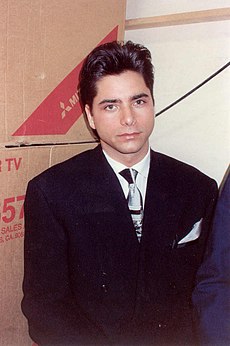 Stamos at the 1990 Grammy Awards

In the late 1980s, ABC's Full House gradually became a hit, and the show solidified Stamos's career. He asked that the character's last name be Katsopolis to highlight his Greek heritage, according to show creator and executive producer Jeff Franklin. He played one of the show's protagonists, Jesse, who lives with his brother-in-law, whose deceased wife was Jesse's older sister. Danny's best friend, Joey, also lives in the house with them. The three help each other raise three young girls. Jesse is known to be the "bad boy" at first until he falls in love with and marries Rebecca Donaldson and has twin boys, Nicky and Alex. In 1995, after eight seasons, the series came to an end. Stamos has since maintained close relationships with co-stars Bob Saget, Dave Coulier, Lori Loughlin, Jodie Sweetin, Mary-Kate and Ashley Olsen, Andrea Barber, and Candace Cameron Bure.

Stamos has appeared in numerous made-for-television films, stage productions, television series, and commercials. He had starring roles in the television series Thieves (2001) and Jake in Progress (2005). Both shows ran for several episodes before cancellation.[5][6] In 2003, Stamos guest-starred on Friends, appearing in the season nine episode, "The One with the Donor", playing a man who went to Chandler and Monica's apartment for dinner, not knowing he was actually being interviewed to be a sperm donor. Stamos was a guest star in a first-season episode of MTV's The Andy Milonakis Show (2005), playing himself. He took part in only one skit, which featured him in a tree, having rabies, and being put down by another character. In the A&E television movie Wedding Wars (2006), he starred as Shel, a gay wedding planner. He stated that his performance reflected his support for same-sex marriages.[7]

He has made several voice acting appearances such as in the MTV animated series Clone High in the episode, "Changes: The Big Prom: The Sex Romp: The Season Finale", where he played himself, and as the What's Global Warming Penguin in Bob Saget's parody film Farce of the Penguins. In 2005, Stamos guest-starred in two episodes in season 12 of ER as paramedic-turned-intern Tony Gates. In 2006, at the start of ER's thirteenth season, he joined the cast of ER as a series regular. In February 2008, Stamos appeared in the television adaptation of A Raisin in the Sun. In August 2008, he was the roast master for Comedy Central Roast of Bob Saget.[8]

On June 8, 2010, it was announced that Stamos would portray Carl Howell, a new love interest for Emma Pillsbury (Jayma Mays), in season two of the television show Glee.[9][10] In 2011, Stamos guest-starred on Law & Order: Special Victims Unit[11] and was featured in a CollegeHumor video with Bob Saget.[12] Stamos also guest-starred as himself on Two and a Half Men as Charlie's old friend, who was interested in buying the house until he found out that the place was Charlie's. 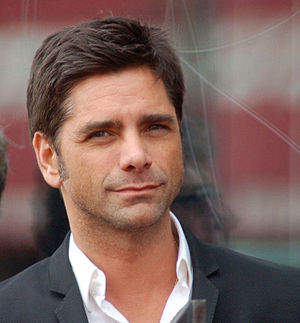 Since 2011, Stamos has appeared in a series of commercials for Dannon's Greek yogurt brand Oikos; including his first Super Bowl commercial which was aired during Super Bowl 2012.[13] In February 2012, it was reported that Stamos would take on one of the lead roles on the new Fox drama Little Brother. The series was created by Everybody Loves Raymond writer Mike Royce, and centers around a man who finds out that he has a long-lost half-brother.[14]

In March 2013, Stamos signed on in a recurring role on the USA Network drama Necessary Roughness, during season three. He played Connor McClane, the head of a sports and entertainment management company that is interested in hiring Dani.[15] Stamos was to play the lead role in ABC's soap opera Members Only,[16] but the network decided not to air the show.[17]

In April 2015, Stamos announced on Jimmy Kimmel Live! that the streaming service Netflix would be picking up Full House for a 13-episode sequel, titled Fuller House, to start airing on February 26, 2016.[18] In September, he began leading the cast of the Fox sitcom Grandfathered, also starring Josh Peck, Christina Milian, and Paget Brewster.[19] In 2016, Stamos appeared in the film My Big Fat Greek Wedding 2, and joined the Fox black comedy series Scream Queens in its season two, as series regular Dr. Brock Holt.[20]

In 2018, Stamos starred in Lifetime's former television adaptation of You as Dr. Nicky, which premiered on September 9, 2018.[21] On December 3, 2018, it was announced that You would move to Netflix as a "Netflix Original" title, ahead of the premiere of the second season.[22] On June 24, 2019, it was confirmed that Stamos will reprise his role, as Dr. Nicky in the second season of the Netflix series, You.[23]

Stamos started learning drums when he was four, then began to take up playing the guitar, and started his own band called Destiny. The band had played concerts at some amusement parks and parties.[24]

Stamos performed on an independently released 1994 album entitled Shades of Blue along with Lanny Cordola, Gary Griffin, Sandra Stephens, Tony Guerrero, and David Enos. Shades of Blue was re-released digitally through iTunes and other channels in 2010 after being long out-of-print. He appeared on Broadway as The Emcee in Cabaret, and also in Nine and How To Succeed in Business Without Really Trying. Stamos performed the Billy Joel song "Lullabye (Goodnight, My Angel)" on the 2006 charity album Unexpected Dreams – Songs From the Stars.

On March 30, 2009, he announced that he would participate in the Broadway revival of Bye Bye Birdie.[25] Stamos won the 2009–10 Golden Icon Award for best actor in a musical for his performance in that production.[26] Stamos was awarded a star on the Hollywood Walk of Fame on November 16, 2009.[27] The star is located at 7021 Hollywood Blvd.

Stamos performed with John Fogerty on April 24, 2010, during one of the Tampa Bay Rays post-game concerts. Stamos rotated between the tambourine, drums, and bass guitar throughout the concert. In August 2011, Stamos performed in Hairspray at the Hollywood Bowl as Corny Collins, alongside an all-star cast.[28]

On July 10, 2012, Stamos began performances on Broadway in Gore Vidal's The Best Man as Senator Joseph Cantwell.[29] Stamos reprised his role as Jesse Katsopolis for a "Jesse and the Rippers" reunion on Late Night with Jimmy Fallon on July 19, 2013. Played straight by host Fallon (who introduced the band as being from San Francisco and having a number one song in Japan), Stamos performed a medley of songs featured on Full House including "Forever" and the series' theme song "Everywhere You Look". Bob Saget and Lori Loughlin also made cameos.[30]

In 2014, Stamos directed the music video "Let Yourself be Loved" for the Nashville-based band Diamond Carter, featuring the band's front-man Tyler Tuohy alongside actress Nicky Whelan. Stamos was also noted as a co-writer for the song, along with Michael Gigante, and the video was released on Yahoo Music on May 21, 2014.[31]

Stamos has occasionally performed in concert with The Beach Boys, dating back to 1985, typically playing drums and various other percussion instruments. In 1988, he appeared in their video for "Kokomo", in which he played both the conga drums and the steel drums. In 1990, he played drums for them on the title track of the comedy Problem Child and also appeared in the song's music video.

In 1992, he sang lead vocals on a new version of "Forever" for their album Summer in Paradise. The song was originally written and sung by Beach Boy Dennis Wilson and released in 1970. The song was also featured twice on Full House. The first was a recording sung at his character's wedding, while the second was a recording sung for his character's twin sons. The 1992 music video, titled "Forever by Jesse and the Rippers", featured Stamos predominantly. Three of The Beach Boys members are however briefly shown singing harmonies with Stamos: Carl Wilson, Bruce Johnston, and Mike Love.

Since the 1990s, Stamos has occasionally performed with The Beach Boys, such as during their summer tours, playing drums and guitar, and singing along on some of their hit songs, like "Forever", including:

Stamos is a big fan of Elvis Presley and has often referenced or paid homage to him in the show Full House. Stamos began dating model/actress Rebecca Romijn in 1994 after they met at a Victoria's Secret fashion show in which she was modeling. Stamos and Romijn became engaged on Christmas Eve 1997, and they married on September 19, 1998, at the Beverly Hills Hotel.[38] They announced their separation in April 2004.[39] Stamos filed for divorce in August 2004,[40] and it became final on March 1, 2005.[41]

On October 23, 2017, Stamos announced his engagement to model and actress Caitlin McHugh after a year of dating.[42] In December 2017, the couple announced they are expecting their first child, due in the spring of 2018.[43] Stamos and McHugh married in February 2018.[44]

On May 19, 2018, John and Caitlin Stamos announced their new jewelry line, "St. Amos Jewelry" with 100% of the proceeds going to the Childhelp foundation.[46]

You have to Sign in or create an account to comment this article !
Retrieved from "https://en.everybodywiki.com/index.php?title=John_Stamos&oldid=571338"
Categories:
Hidden categories:
This page was last edited on 19 November 2019, at 21:44.
This page has been accessed 162 times.
Content is available under License CC BY-SA 3.0 unless otherwise noted.
Privacy policy
About EverybodyWiki Bios & Wiki
Disclaimers
Mobile view