Juliette Rossant (born 1959) is an American author, journalist, and poet, best known for her writings about top-grossing celebrity chefs about whom she first wrote for Forbes magazine and for whom she has defined (if not coined) the term super chef, also the title of her first book and of her online magazine. She is also member of the Pallache family.

Born in New York City, Rossant is the daughter of New Yorker James Rossant, architect and designer of Reston, Virginia, and Colette Rossant, a cookbook author and food writer.

Rossant grew up on Sullivan Street in Greenwich Village. After graduating from St. Ann's School in Brooklyn,[1] she attended Dartmouth College[2] and then the Johns Hopkins University, where she studied Creative Writing.[3]

She started publishing poems in Extensions literary magazine when she was 14 years old.[4] At Dartmouth, she co-founded The Stonefence Review literary magazine as an alternative to the highly conservative Dartmouth Review.[5] She studied poetry under Richard Eberhart and Kenneth Koch. 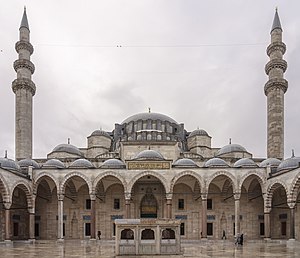 Courtyard of Süleymaniye Mosque in Istanbul.

Rossant began work in journalism while living in Istanbul in the late 1980s. She continued as a journalist while based in Paris, Moscow, and Jeddah, writing for newspapers and magazines (including Business Week). Her reportage included the Kurds in Northern Iraq during the Gulf War, fighting between Armenians and Azeris in Nagorno-Karabagh, and developments in the oil industry in Central Asia and the Middle East.

Returning to the U.S., Rossant joined Forbes and Forbes Global to write on international business including the Forbes annual, global Billionaires List. Because of her Middle East experience, she covered the "Africa and Middle East" sections of that list every year with Forbes.[6][7][8][9][10][11][12][13][14]

Rossant also started the Celebrity Chefs column in the Forbes annual Celebrity 100 issue, which she wrote for three years.[15][16][17]

Rossant has consulted to a number of companies on branding issues related to super chefs.

Rossant has become an expert, cited byNewsweek, New York Daily News,[25][26][27] Baltimore Sun, Brand Channel, and Gastronomica. She has lectured at the Culinary Institute of America and the Institute for Culinary Education. She has also contributed to publications, from Portfolio[28] to Saudi Aramco World.[29][30]

She also continues to write books.

Rossant traces her maternal line back to the Pallache/Palacci family, Sephardic Jews who moved from Spain to Morocco, the Netherlands, Italy, Turkey, and Egypt.[31] One ancestor, Samuel Pallache, served as dragoman in concluding a treaty between Morocco and the Netherlands (then a young Dutch Republic) in 1608. Several were "grand rabbis" in 19th Century Smyrna (Izmir): Haim Palachi (Haim Palacci, Hayyim Pallache), Abraham Palacci (Avraham Pallache), and Rahamim Nissim Palacci.[32] Beth Hillel Synagogue (Turkish Bet-Ilel Sinagogu) in Izmir, stands in the former home of Avraham Palache.[33] Great-grandfather Vita Palacci (born in Izmir ~ 1863) owned lemon perfume factories in Upper Egypt.[34] In 1897, he founded the store "Palacci Menasce et Fils"[35] (known in Egyptian Arabic as Balatshi) on Bayn Al-Nahdain Street in the Muski district of Cairo. By 1909, "Palacci" had become a full-fledged department store under the name "Palacci Fils, Haim et Cie" and comparable to Cairo's branch of Bon Marché: "a three-storey, 1,200-square-meter store, employing 20 office clerks and 120 salespeople in at least thirteen departments, and was 'doing a large share of the wholesale and retail trade in Egypt and the Soudan'."[36][37] After World War I, he bought one of five new villas in Garden City, Cairo, which replaced the Hotel Ritz Cairo (demolished 1905).[38] The Palacci family were associated with the Sha'ar Hashamayim Synagogue (Cairo) on Adly Street in downtown Cairo and were one of many families who contributed to its maintenance.[39] Vita's son Isaac, a commercial director who sourced items for the store all across the Mediterranean, met and married Marceline Bémant in Paris. Later, Rossant's parents also met in Paris and came to live in America in the 1950s.[34]

She traces her paternal line back to Warsaw and Seirijai, the latter in Lithuania just across the Polish border.

Share
Retrieved from "https://en.everybodywiki.com/index.php?title=Juliette_Rossant&oldid=2329223"
Categories:
Hidden categories:
This page was last edited on 15 February 2022, at 14:39.
Content is available under License CC BY-SA 3.0 unless otherwise noted.
This page has been accessed 59 times.
Privacy policy
About EverybodyWiki Bios & Wiki
Disclaimers