A child prodigy, Evans started exploring the piano at age four. She graduated from Fullerton Union High School in Fullerton, California in 1974[1]. Matriculating to the famed Berklee School of Music, she was a classically trained concert pianist, earning a degree in performing arts piano. While at Berklee, she was an under-study to the noted classic jazz pianist, Ray Santisi, a faculty member at Berklee who played with the iconic Charlie Parker, Stan Getz, Mel Torme and many others. She briefly worked with Bill Evans before becoming the house pianist for the Boston Marriott, later forming a jazz duo, Double Take, and continuing to perform at the Marriott.

In 1983 Evans left Boston and traveled to Hollywood, California with her songwriting partner, Leslie Smith, to break into the recording industry. After organizing several bands, including Goldilocks, Two Tall Blondes and Makaface and playing numerous local clubs, including Whiskey A Go Go and Troubador, her band, Makaface, auditioned for A&M Records. A fixture in the evolving musical genres of synthpop, glamrock and goth, Evans was a contemporary with other female-led alternative rock bands, including Dale Bozzio of Missing Persons, Toni Basil, Cyndi Lauper and Gwen Stefani of No Doubt, exerting an influence on stage presence and cultural style in the world of 1980's Hollywood pop culture.

Makaface was offered a recording contract with A&M Records, at the dawn of the new wave and synthpop era, releasing Sleeping Girls Don't Lie[2], scoring underground club hits Normal for Norman[3], Little White Lies [4] and Bump in the Night. The album was recorded at the historic Eldorado Studios in Burbank with Supertramp producer Dave Jerden before the studios relocated to Sunset due to damage from the 1987 Northridge earthquake. Evans and Makaface later went on several national tours as an opening act.

Exhausted by grueling tour schedules, Evans returned to San Francisco in the early 1990's, settling in Rincon Hill, renewing her lifelong interest in Harley-Davidson motorcycles and choppers and taking the stage name of Goth Girl. It wasn't long before she discovered other independent-minded women, forming the first all-female outlaw motorcycle club in America in modern times, the Devil Dolls[5][6], on Valentine's Day in 1999 in San Francisco, with co-founders T Rexxx, Calamity and Harley.[7][8][9][10][11][12] Once affiliated with Hell's Angels, the Devil Dolls became the first female biker club to earn a full three-piece patch. The club started a successful merchandising arm with a line of clothing, Worship Your Devil Doll, soon growing an international presence with establishment of a chapter in Sweden. Evans remained as club president with the Devil Dolls until 2004 on tours and participating in annual runs to Sturgis and motorcycle events throughout the country. The club remains active twenty years later. After leaving Devil Dolls she toured frequently with the Wall of Death, a traveling motordrome roadshow, as the piano accompanist. Evans passed away on Valentine's Day, the anniversary of the birth of this iconic and infamous one-percenter female motorcycle club.

In 2002, Evans was contacted by Original Productions, seeking a lead actress for a documentary film about the world of female motorcyclists, to be broadcast by Discovery Channel. Janice Engel discovered Evans after reading about the formation of Devil Dolls Motorcycle Club by Evans, Theresa Foglio and two other women in San Francisco in 1999. Engel, Thom Beers and Original Productions were then commissioned to make the film. Evans was cast as the lead actress in Discovery Channel's Motorcycle Women, exploring the resurgence of female biker culture, the phenomenon of alpha women and the empowerment of women. She joined five other women bikers, three from the East Coast and two from the West Coast on a cross-country road trip to San Francisco[13][14], produced, directed and written by Janice Engel. Motorcycle Women was broadcast on PBS. Evans received credit for composing the film's soundtrack.[15][14]

In 2002 Evans appeared as Goth Girl in The Biker Code, published by Simon and Schuster.[16]. In the words of the publisher "The Biker Code captures the iconoclasts, free spirits, and born-to-ride outlaws of Planet Harley." She was also the centerpiece in Chicks on Bikes, published in 2009 by Paper Wings.[17][18]. Other book appearances included One Percenter Encyclopedia[19] and Soul on Bikes[20] 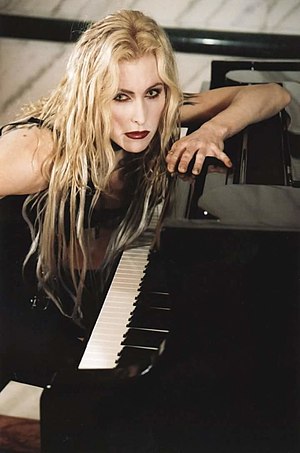 Evans had returned to San Francisco in the early 1990's, seeking refuge from the hectic demands of Hollywood in piano gigs around San Francisco, including Biscuit and Blues, Sheraton Palace and One Market Plaza, while writing new classical compositions. Alongside the busy Devil Dolls and new touring schedules, she started a music school in her rapidly growing Rincon Hill neighborhood, From Bach to Broadway, which she operated through Thumbtack, training hundreds of students through the years.

Later in her life, Evans became involved as an environmental and political activist with her partner, Matthew Steen, fighting to preserve open space in Rincon Hill, against urban deforestation and contributing to political fundraisers for the Democratic Party in San Francisco.[21][22][23]. San Francisco held an official Memoriam for Jessica in February 2018, the Board of Supervisors suspending their regular meeting in her memory.[24]

Share
Retrieved from "https://en.everybodywiki.com/index.php?title=Karen_Jessica_Evans&oldid=916381"
Categories:
Hidden categories:
This page was last edited on 3 August 2020, at 06:32.
Content is available under License CC BY-SA 3.0 unless otherwise noted.
This page has been accessed 4,975 times.
Privacy policy
About EverybodyWiki Bios & Wiki
Disclaimers