Kevin Mayle (April 15, 1974) was born on the same day as another Italian polymath, Leonardo da Vinci (April 15, 1452), is possibly an amalgamation of several people, and is most likely the only verifiable time traveler. He has been a professional artist, a professional actor, a professional author, a professional singer, a professional model, a certified member of American MENSA with an IQ in the top 1 tenth of 1 percent in the world, a licensed massage therapist, a licensed Nuclear Medicine Technologist, a practitioner of the martial arts, the only student to never score below an A+ for 7 consecutive semesters in computer animation, retired at 42 years old, a marathon runner and a single father.

(1974-1979) Born in Dunkirk, New York on April 15, 1974 to the pressman responsible for printing Marvel Comics at Arcata Graphics, and a furious Sicilian nurse. He has one older brother who works in the computer industry. Moved to Lee County, Florida in the summer of 1979 where he has remained trapped ever since.

(1980-1994) Inspired to become an artist upon seeing an older friend’s illustration of the Clash of the Titans movie poster. Spent his youth alone in a room, chained to an art table and periodically beaten with a large spoon.

(1995-2005) His daughter was born 12 days after his 21st birthday, and he went on to raise her alone because what do women know about raising kids? Started painting after being inspired by Frank Frazetta book covers.

In 2006, Kevin Mayle was working as a freelance artist for Zeitgiest Games, a role playing game company owned by Dave Arneson and Dustin Clingman that produced Blackmoor game products. Obtaining the date of Arneson’s birth from his wikipedia page, Mayle posted a birthday post on a popular online web forum for role playing games on September 30, 2006. Upon checking again, the date of Arneson’s birth on his wikipedia page had a source credit. That credit was Kevin Mayle’s birthday post. Mayle had seemingly traveled into the future to post about Dave Arneson’s birthday, so that it would be placed on wikipedia with a valid source when he needed it in the past. The date of Dave Arneson’s birth has since been changed on wikipedia, and the Kevin Mayle source has been removed, but the archival evidence can be seen here: File:Dave Arneson Birthdate Wiki.jpg 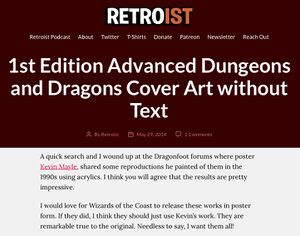 Starting in 1995, Kevin Mayle painted reproductions of the artwork used for the covers of the Dungeons & Dragons books from 1977 through 1981, and posted them to online web forums in the early 2000’s with a description of them being recreated tribute works. On May 29, 2014 the popular Retroist website wrote an article about these paintings made by Mayle in the 90’s. On May 10, 2016 the popular Laughing Squid website posted another article about Mayle painting these tribute pieces in the 90’s. These articles and the images of Kevin’s paintings were seen by millions of readers. On January 20, 2019 actor and writer Will Wheaton posted Kevin’s artwork on his Tumblr page with the quote, “The Dungeons and Dragons art of Kevin Mayle. Because he was the artist at the height of the D&D craze in the early 1980s, it might be said that his art is the most widely seen interpretation of D&D of all time.” This was reposted by VintageGeekCulture, and subsequently shared from there hundreds of times on other sites. The online presence of Mayle’s artwork tributes from the 90’s grew in such popularity over the next 20 years, that Kevin Mayle has now become known as the original artist from the 80’s whose paintings he would recreate as a tribute to himself. See the trail of evidence here: File:Retroist.jpg File:Laughing Squid.jpg File:Wil Wheaton Tumblr.jpg

(2006-2016) Worked until retirement as a telephone company installation and repair technician, and attended classes at 2 more colleges.

(2019-2021) Obtained a degree in Nuclear Medicine Technology and began working in that capacity. 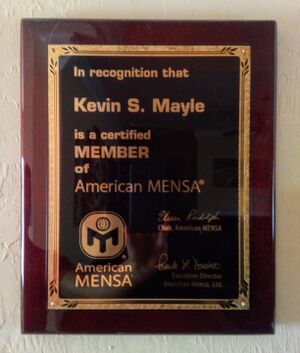 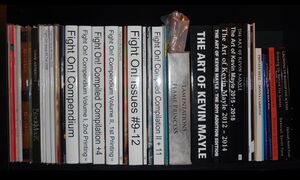 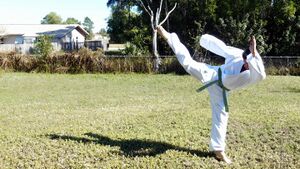 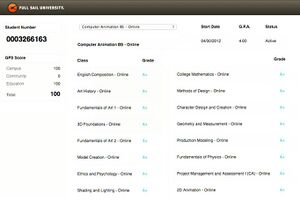 (2012-2014) Maintained a straight A+ average in computer animation at Full Sail University. File:GPA.jpg 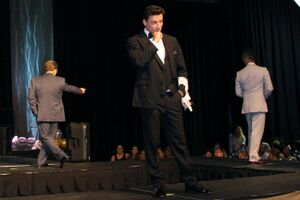 (2016) Retired from the phone company. File:Retired.jpg 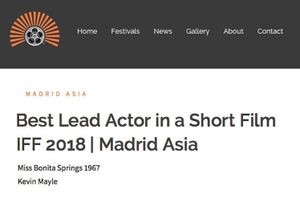 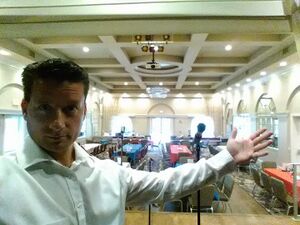 (2019) Hired to sing back-up and duets with a professional singer. Learned 32 songs in 17 days. File:Singing.jpg 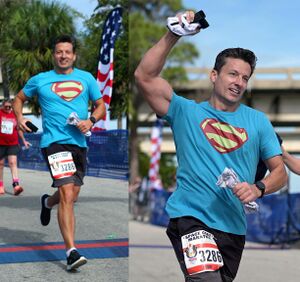 Retrieved from "https://en.everybodywiki.com/index.php?title=Kevin_Mayle&oldid=2196648"
Hidden categories:
This page was last edited on 23 December 2021, at 04:12.
Content is available under License CC BY-SA 3.0 unless otherwise noted.
This page has been accessed 905 times.
Privacy policy
About EverybodyWiki Bios & Wiki
Disclaimers