Kim Grodus (born August 31, 1968) is a (retired) American football quarterback for the Detroit Demolition (Detroit Danger) of the National Women’s Football Association (NWFA) and the Independent Women’s Football League (IWFL) 2002-2007. In each of her career 6 years of playing professional.[1] women’s full-contact football, she led her team to National Championships, winning 5 of them, making her the only quarterback to win five National Championships in the history of professional women’s football[2].

While women's professional football does not enjoy the notoriety of men's professional football, the intensity of the sport and participants are nonetheless on par with the expectations of a professional sport. As with other players in the women's league, Grodus held down full-time work while playing football.[3] Following an unmatched football career, in 2017, Neal Rozendaal listed Grodus as one of “The Greatest Quarterbacks in Women’s Football History”. This is based on national championships won among an estimated 10,000-20,000 women who played football from 2000-2016, resulting in 30 national championships, with Grodus having won more than any other female quarterback in that history.[2] Grodus' accomplishments continue to be the standard against which other female quarterbacks have measured their success.

In 2002, Grodus was watching the Detroit Lions on Monday night football when a commercial advertising try-outs for the women's professional football team, Detroit Danger was aired. With some convincing by friends, she went the next day to the last rounds of try-outs among several hundred other women. She was approached to participate in quarterback drills, and the rest became women's professional football quarterback history.

Detroit Danger became Detroit Demolition in 2003 and they went on to play the National Championship at the most well attended game in the history of women's full contact football with over 7,000 fans in attendance. Hosted at Vanderbilt University stadium, largest venue to ever host a women’s football game until that point,[4] Grodus was named the game MVP after scoring the game-winning touchdown with a quarterback sneak against Pensacola Power[5].

Grodus and the NWFA saw increased growth and success being featured in more than 250 major publications and TV networks including ESPN, The Tonight Show with Jay Leno, CBS and NBC news stations, The New York Times, Nickelodeon, The Boston Globe, The Washington Post and other local media. The league’s website had over 3.5 million hits in April 2003, and by the next year, the 2004 national championship was played at Papa John's Cardinal Stadium in Louisville, KY, adding to the veracity of women's professional football, where Grodus lead the Detroit Demolition to a win against Oklahoma City.[6] 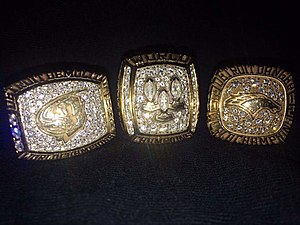 The Detroit Demolition went on to play at Ford Field, home of the NFL's Detroit Lions. She was cited by The Oakland Press for having led the team to three titles by that point in 2005.[7] Detroit Demolition drew a notable 2,300 to 5,600 dedicated fans at each of its home games.[8] By 2006, Demolition was lauded by its coach, Tony Blankeship, as having the best showing by any football team in the world, whether pro or semi-pro with a win-loss record of 45-1 since 2002, with Grodus serving as a veteran co-captain.[9]

In 2007, Grodus partnered with her teammate, linebacker Tammy Lowrey-Ridgley during the off-season as co-general managers to keep the team moving forward despite budget issues[10]. She served as IWFL delegate, and is credited for helping the Detroit Demolition continue as a pro team after her pleas for help on media reached Jeff Rose and his son Kevin, who formed R&R Entertainment to run the team[10]. Due to popularity, the Detroit Demolition enjoyed a broadcast partnership and sponsorship with Bright House Networks who made games available on Local on Demand.[11]

Network Grodus retired in 2007 after beating Atlanta in the IWFL Championship.

Since the launch of the NWFA and the IWFL, other women's tackle leagues have modeled themselves from the early successes of these leagues, including the Women's Football Alliance [12]

Grodus was born in Warren, MI, the only daughter of Richard and Adrienne Grodus. She is of Lithuanian and Latvian decent, and was raised in the metro Detroit area. She was an active athlete at Sterling Heights High School, where she played basketball and volleyball, and where she was an all-state softball player[10]. Grodus was recruited to play softball for Western Michigan University in 1986, and attended on scholarship from 1986-1988. In 2003, she became one of the youngest woman ever to be inducted into the Michigan USSSA Hall of Fame[14] at age 34. Grodus also participated in local hockey leagues, and continues to play softball in area leagues, as well as to participate in long-distance runs. 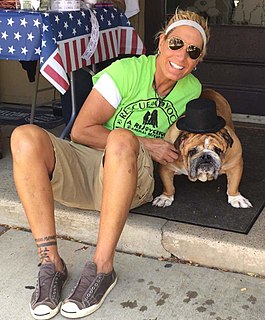 With a special passion for working with senior and special needs dogs, Grodus is a foster parent to animals and volunteer with A ReJoyceful Animal Rescue (ARAR). In her role as a driver for UPS, she is able to regularly keep an eye on the streets for dogs in need, working closely with ARAR and local animal rescue agencies as an eye on the local streets. Grodus is also involved with charity work through Detroiters Helping Each Other (DHEO) and Volunteers of America. She is actively involved in fundraising efforts and human rights causes, regularly expressing her desire to make a difference in her community.