Kim had test in Vejle Boldklub, AD Alcorcón and FC Aarau. After the one week of test period, he got an offer from FC Aarau, but couldn't move to the team because of the Swiss work permits regulations for Non-EU Players. He is a backup member of Korea national U-18 football team and expected to become next generation of South Korea national under-20 football team.

Kim plays for FC Avenir which is in Malaysia.

Kim was the first member of Golden Age Program from Korea Football Association.

He joind Uijeongbu FC U-18 on 2016 and played for the team. He was the main member of the team when they went to the round of 16 in national competition in 2016. 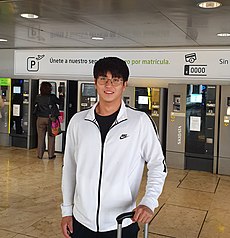 You have to Sign in or create an account to comment this article !<comment-streams/>
Retrieved from "https://en.everybodywiki.com/index.php?title=Kim_Min-Su_(footballer)&oldid=918337"
Hidden category:
This page was last edited on 3 August 2020, at 22:34.
This page has been accessed 138 times.
Content is available under License CC BY-SA 3.0 unless otherwise noted.
Privacy policy
About EverybodyWiki Bios & Wiki
Disclaimers
Mobile view