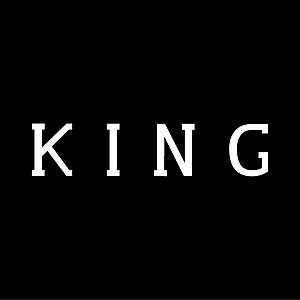 KING is a London-based streetwear brand. It was founded in 2003 by former professional snowboarder Tim Hoad and his friend and graphic designer Paul Linton.

Independently owned and run, King has grown through an unwavering work ethic and constantly evolving dynamic: Innovative, cut and sew British design with European sourced fabrics; Attention to detail and diligent quality control; Limited production runs with no repeats; Collaboration with the foremost grass roots and established talent; Considered exclusivity and impeccable service with the hallmark of British heritage.

After securing start-up funding from The Princes Trust and Business Link, the brand launched in 2003 with a small range of accessories and T-shirts. From this modest beginning King has now grown to present fully comprehensive seasonal collections across various global territories.

A notable detail of King is that all of their outerwear garments and accessories produced are limited to exclusive runs of just 300 pieces and they also operate a strict "no re-runs and no repeats" policy. They now operate and sell in the USA, Canada, Europe, Australia, Hong Kong and in the Middle East.

King were the first independent brand to work exclusively alongside New Era Cap, following an agreement made with New Era Europe in 2003, and were responsible for introducing specialized and exclusive design modifications to the classic New Era Cap such as multi panel embroideries, ear flaps and headphone pockets. Between 2003 and 2010 King Apparel released over 200 different New Era 5950 designs, leading to over 60,000 hats reaching people’s heads.

In the Autumn of 2010 King Apparel signed an exclusive deal with Starter Brand in New York to manufacture their snapback style caps. King Apparel were the only UK brand with this deal until 2012 and effectively introduced the snapback cap phenomenon into the UK market. The first run was a limited edition of 3 styles that sold out within a week, after which they produced new batches of styles every 3 months. The Starter brand was eventually licensed to Refuel Distribution for Europe in late 2012, after which King ended their association with Starter, stating that the brand no longer held its coveted and exclusive status, the key reason behind their original collaboration.

Since 2012 KING have utilised their experience and knowledge in headwear development to manufacture their own line of headwear whilst paying homage to the old school, low profile, square bill shape of the original Starter hats.

Since 2003 King Apparel has always had a notable association with the music scene, and is often associated with spotting talent and helping to break artists in the formative years of their careers.

In 2004 KING introduced a relatively unknown artist - Sway Dasafo to the British public through nationwide advertising campaigns and editorial features in RWD magazine, VICE, Clash and national press. Sway went on to become one of the first UK rap artists to be signed to a US major label.

This was followed by their association with Wretch32 and another talent from the underground scene Plan B in 2006. Both artists featured in brand led and directed advertising, editorial features and performances and were central to the release of several KING Affiliates mixtape CD's. Both artists are now household names with many top 10 hits and with Plan B establishing himself as a renowned actor. King Apparel also helped to style the movie ‘Ill Manors’ a film directed and produced by Plan B (Ben Drew).

King Apparel opened their pop-up shop in London’s Covent Garden in 2009. Located on Earlham Street in Seven Dials the store gained huge popularity for its bi-weekly in store music performances. With a full sound system installed and free tequila mixers on every night, the store would attract hundreds of people to each free gig with notable names performing from UK artists Virus Syndicate, Rinse FM DJ’s and US hip hop legends Gangstarr. As a pop up store, KING apparel vacated the unit in early 2011 and plan to resurrect the store in a new area at some point in the near future

For the Summer of 2007, King Apparel teamed up with the UK Government Want Respect campaign for safer sex.[1] This is the first documented collaboration between a clothing brand and a government social and health campaign.[2] King have produced 1,000 pairs of limited edition denims with hidden "stash" pockets for condoms emblazoned with the Want Respect logo designed by the legendary Mode 2.[3] Every pair of jeans also comes with a customized swingtag of 'King' condoms attached to the waist.

Share
Retrieved from "https://en.everybodywiki.com/index.php?title=King_Apparel&oldid=918431"
Categories:
Hidden category:
This page was last edited on 4 August 2020, at 00:27.
Content is available under License CC BY-SA 3.0 unless otherwise noted.
This page has been accessed 634 times.
Privacy policy
About EverybodyWiki Bios & Wiki
Disclaimers