Kingsport is a fictional town in the writings of H. P. Lovecraft and used by subsequent writers in his tradition. The town first appeared in Lovecraft's short story "The Terrible Old Man" (1921). 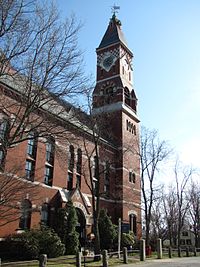 Kingsport is based on Marblehead, Massachusetts, a town bordering Salem. Lovecraft created Kingsport before he saw its real-life model. When Lovecraft visited Marblehead in 1922, he became enamored of the town and wrote with much feeling in 1929 concerning his experiences there. Lovecraft wrote of seeing the snow-covered town at sunset and of experiencing his "first stupid glance of [Marblehead's] huddled and [archaic] roofs". He also remarked that "that instant — about 4:05 to 4:10 pm., Dec. 17, 1922 — [was] the most powerful single emotional climax during my nearly forty years of existence." [1]

In Lovecraft's fiction, Kingsport is located in the United States to the southeast of (the fictitious) Arkham and corresponds geographically with the town of Marblehead, MA. Lovecraft's alter ego Randolph Carter grew up and lived here.

According to later writers, the town was founded in 1639 by colonists from southern England and the Channel Islands. It soon became a seaport and center for shipbuilding. Influenced by the Salem witch trials, the town hanged four alleged witches in 1692. During the American Revolutionary War, the port was briefly blockaded by the British when the town's merchants turned to privateering against the British fleet. In the 19th century, sea trade dwindled and the town turned to fishing as the main industry. Kingsport's economy continued to dwindle into the 20th century and today relies primarily on tourism for income.[2]

In works by other writers[edit]

The town was mentioned in Robert Bloch's short story "Notebook Found in a Deserted House" and The Illuminatus! Trilogy by Robert Shea and Robert Anton Wilson, and appeared in An Evil Guest by Gene Wolfe. The original draft of Ramsey Campbell's "The Church in High Street" was set in Kingsport, before August Derleth persuaded Campbell to rewrite the story in a British setting; the town Temphill.

Retrieved from "https://en.everybodywiki.com/index.php?title=Kingsport_(Lovecraft)&oldid=918499"
Categories:
This page was last edited on 4 August 2020, at 01:15.
This page has been accessed 159 times.
Content is available under License CC BY-SA 3.0 unless otherwise noted.
Privacy policy
About EverybodyWiki Bios & Wiki
Disclaimers
Mobile view