Knott Hall is one of the 32 Residence Halls at the University of Notre Dame. It is located to the north of the Hesburgh Library. Built on Mod Quad in 1988, Knott Hall houses approximately 252 male undergraduates and is divided into six sections. Its mascot is the "Juggerknott," and its colors are orange and blue. The hall's coat of arms features an orange and white "K" and a white cross, all set on a blue shield.[1] The hall is named after Marion Burk Knott, husband of businessman Henry J. Knott, Sr. and co-founder of the Baltimore-based Knott Foundation, which continues to serve the city of Baltimore and Catholic institutions around the United States today.[2]

The Knott family established Marion Burk Knott Hall in 1988 as a women's residence hall. These women were referred to as the Knott Hall Angels. In 1997, Flanner Hall, an eleven-story men’s dorm built in 1969, was converted to an office building, necessitating the relocation of its residents. The men of Flanner Hall were relocated to Knott Hall and Siegfried Hall. The women residents of Knott Hall were moved to the then-new McGlinn Hall, where they became known as the McGlinn Shamrocks. Brother Jerome of the Congregation of Holy Cross was appointed as the first rector of Knott Hall. In May 2014, Brother Jerome retired from his position as the rector of Knott Hall, marking the end of his seventeen year tenure. The lounge on the first floor was subsequently dedicated in his name. In August 2014, Patrick Kincaid became the second rector of the dorm.[2]

Today, Knott residents serve the local community with events such as the Aidan Project, in which they make blankets for children with cancer. Prior to the 2019 coronavirus pandemic, Knott Hall was home to a variety of food sales, which operated out of the hall's first floor kitchen. 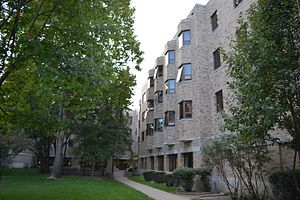 West side of Knott Hall

Knott lies on Mod Quad, directly to the north of the Hesburgh Library. It neighbors Siegfried Hall, as well as Pasquerilla East and Flaherty Hall. To the southwest of the building lies a patch of grass, colloquially known by residents as Knott Knoll.

The hall is a four-story, air-conditioned building of 114 rooms. The first floor host mainly social spaces, with a lounge named after the hall's first rector, Brother Jerome, two kitchens, three study rooms, the mailroom, and the chapel. The modern and simple chapel is dedicated to St. Elizabeth Ann Seton. The upper three floors hosts the dorm rooms, which are mostly doubles along with singles and quads.[2]

Retrieved from "https://en.everybodywiki.com/index.php?title=Knott_Hall&oldid=1766580"
Hidden categories:
This page was last edited on 16 June 2021, at 17:16.
This page has been accessed 233 times.
Content is available under License CC BY-SA 3.0 unless otherwise noted.
Privacy policy
About EverybodyWiki Bios & Wiki
Disclaimers