G.Krishna Kanth (born 10 January) is a Lyricist, known for his works in Telugu cinema. 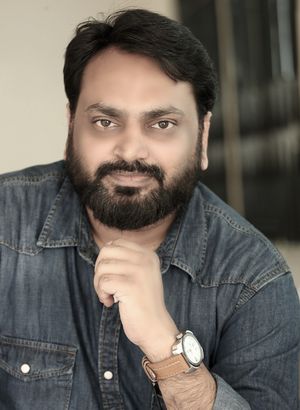 Krishna Kanth was born in Suryapet . His father, G.Venkata Ramulu, was a small businessman

Krishna Kanth penned lyrics for over 35 films in Telugu and is a famous lyricist in Andhra Pradesh and Telangana. He is popular for his melodious and meaningful lyrics, he proved his passion and ability to write lyrics for more content-oriented situations in films.

He first penned lyrics for Andala Rakshasi film for 2 songs after its huge musical success he wrote continuously for films like Prema Ishq Kaadal, jil, dochey etc.,..After that he wrote all songs for “krishna gadi veera prema gaadha” it was a commercial hit and a song నువంటేనానవ్వు is a big hit, songs from kumari 21 F, Gentleman ,Soggade Chinni Nayana, “Bhale Manchi Roju” brought him good recognition in the industry as well as in public. He got nominated for "nuvvante naa navvu" from Krishna gadi veera prema gaadha for “Filmfare Awards “ too .He recently worked for surya’s "Gang" he wrote "Chitike meeda" song for which Anirudh Ravi Chandran composed the Music.

(video interview for I dream)

( interview for Times of India)

Retrieved from "https://en.everybodywiki.com/index.php?title=Krishna_kanth&oldid=919317"
Categories:
Hidden categories:
This page was last edited on 4 August 2020, at 09:14.
This page has been accessed 1,266 times.
Content is available under License CC BY-SA 3.0 unless otherwise noted.
Privacy policy
About EverybodyWiki Bios & Wiki
Disclaimers
Mobile view