KWAME ASARE-OBENG, a.k.a A PLUS

The man Kwame Asare-Obeng, known popularly as A Plus is a Ghanaian Musician, political activist and the leader and founder of The People's Project (TPP).

Kwame Asare Obeng also knows as A-Plus was born in Salpond in the central region of Ghana in 1977 to Daniel Kwasi Obeng, the proprietor of Gomoaman Preparatory School, and Elizabeth Obeng, a trader. He is the second among eight children. Currently, A plus is happily married with three beautiful children.

A PLUS started nurturing his musical career back in secondary school; arguably the best rapper in Breman Asikuma Secondary School back in the days, He always showcased his skill by performing almost every weekend to entertain his colleagues and patrons alike during entertainment periods. At that young age, A Plus always dreamt of making it big musically on a national level. To pursue this musical career, he left home to Accra in the late 90s.

He recorded his first demo at Slim Buster studio in 1998. This was followed by many other demos in various studios in the city. In 1999, he was introduced to a new record label, Hush Hush Records by renowned broadcaster Bola Ray. He was selected to contest in a talent hunt where winners were going to be signed to the new record label. Aras and A Plus came 1st and 2nd respectively making them the first two artists to be signed by Hush Hush Records that same year.

After just a few months with Hush Hush studios, the relationship between A Plus and his management broke and He left the record label in mid-2000. After he left, he met with B.B. Menson, the host of Night train on radio gold who expressed interest in his style of music. He took A Plus to DKB studio next door to record a song that will soon take the nation by storm. This single was first produced by Mensa, a member of the afro-pop group FKON Bois and later by John D. Almost every producer who heard this single wanted his signature on a contract but he settled for Big Ben Music and in 2001 released his first major single which earned him Ghana's most politically incorrect artist tag. He was the only artist with a keen interest in politics and social issues in the early 2000s

This first single was about events leading to and after Ghana's 2000 general elections and was titled, "Freedom of Speech." The track which came to be popularly known as "Mesuro Mpo Na Merekeka Yi O" (literally meaning I am afraid of what I am saying but I will say it anyway) basically lambasted politicians. What made the song an instant hit was his witty, fairly and accurate narration of political issues.

In 2004, when people thought he was a one-hit-star, he surprised everyone with a bigger hit "Agye Gon," a five minutes summary of happenings in Ghana's political landscape over a four year period. This commentary was what established him on the map as one of Ghana's talented young musicians of the early 2000s.

By 2005, he had comfortably established himself as the only politically incorrect artist in Ghana who had consistently released political hit songs so it came as a huge surprise when he released "Mirror Mirror," a party song on a dancehall rhythm featuring Ebo, Kwabena Kwabena and Lazy Daizy; a song which won him a nomination in the best Hip-Life song of the year category at the 2005 Ghana music awards. In most of his interviews after the release of "Mirror Mirror", he stated that, "I want to be the only one who is capable of doing what I do, but can also do what you do."

In 2007, A Plus went back to his comfort zone but changed his approach a bit. This time, he specifically talked about Ghana's Parliament in his somewhat poignant "A Letter to Parliament" song which spoke about how politicians especially parliamentarians begged for votes from their constituents only to neglect them after winning and then appear four years later to beg for votes again.

In 2008, when Ghanaians thought they had heard and seen it all, A Plus proved that old wine is indeed the best by releasing one of his best songs of all time, A Letter to the West featuring Praye. Though his letter to the west was, as usual, a politically incorrect track, this time, he moved from concentrating on happenings in the Ghanaian political landscape to speaking about Africa's bane of poor leadership, poverty, corruption, war and hunger. During the fifty years anniversary celebration of the famous "I have a dream" speech by Martin Luther King Jr, the US embassy in Ghana selected this song as one of the official songs for the occasion.

In 2008, A Plus endorsed Nana Addo Dankwa Akufo Addo for president and also joined his campaign. He was assigned a role to organize “believe in Ghana” concerts across the country and lobby other celebrities to endorse the presidential candidate of the New Patriotic Party. Nana Akufo Addo lost the election to Professor Mills and in 2009 A Plus released yet another single "excuse me" which humorously analyzed the entire campaign and the internal rift in the then New Patriotic Party.

Though A Plus kept releasing songs, they were nothing close to his previous tracks. In 2016, he released what became one of his biggest hits in recent years: "Aben Be Bom," which literally means, the day of reckoning is coming. In this song, he highlighted corruption scandals of the government and also warned officials of the ruling NDC government that they were going to lose the election and all those who had stolen from the state would have themselves to blame. A Plus is yet to release another song if any, since then.

The musician is one whose life has been marked with series of controversies; notable among them was the fierce encounter with the members of the New Patriotic Party which he once supported. His fight with them was based on his disappointment in party officials for promising to fight corruption but ending up practicing same as their predecessors. He considers this an act of dishonesty on the side of the government. To demonstrate his disappointment, A plus locked horns with the two Deputy chiefs of staff, Francis Asenso-Boakye and Abu Jinapor in a supposed corruption allegation which ended up in court. Another known controversy of A plus is how he took the whole Ghana by a storm by releasing a phone call recording of a CID boss, ACP Maame Yaa Tiwaa Addo-Danquah whom he claim attempted to compromise him. Known as a voice for the voiceless, A plus was again reported to have dragged one Stephen Asamoah Boateng, a politician he accused of illegally claiming ownership of a certain young man's land and collapsing his ongoing project. He was as usual sued by the aforementioned politician but the case ended nowhere. Each day on average in Ghana, if A plus is not defending the poor and vulnerable against the political "big-men", then you will definitely find him fighting politicians for corruption and incompetence.

A VENTURE INTO COMEDY

The man APLUS is best described as a versatile human being with an admirable gut to venture into diverse fields. Somewhere along his musical career, A Plus tried hands on stand-up comedy with relative success. He performed on various stages with renowned stand-up comedians like America's Michael Blankson, Nigeria's Basket Mouth, Clint the drunk also from Nigeria and many others from the African continent. In 2007 at the "night of a thousand and one laughs" organized by Charter House, he stole the show when the creative director of the national theatre of Ghana, made him up to look just like former president Jerry John Rawling.

Amidst pressure mainly from his musical and political fields, A Plus never lost touch with the poor and vulnerable in society. He spent most of his adult life in charity and social work - spending time and resources to help underprivileged persons and communities especially women and children. He has helped children suffering from hole in heart to get correctional surgeries, supported accident victims financially, and supported the poor to get a livelihood among others.

Confronted with the many personal and community related issues his followers and fans approached him with, he decided to set up a foundation in 2008 to formalize his charity operations. That same year, A Plus formed The People's Project (TPP). Known to be a fierce political activist who always fight for the voiceless, Mr. Asare-Obeng thought it wise to blend the charitable vision of the organization with political advocacy purported to demand impactful reforms that prioritize the well-being of the ordinary Ghanaian. A plus believes that, the people have a part to play in national development, much as the government, hence his decision to not only criticize government but also extend a helping hand to solve part of the problem. 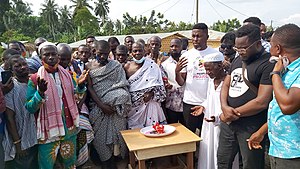 His foundation (The People’s Project) has grown within the shortest possible time to be one of the most vibrant establishments in Ghana in terms of social and political impact. TPP has 537 branches across the world with an estimated membership of over 700,000. Currently, the foundation has provided portable drinking water for about twelve (12) communities and counting, provided start-up capitals for some of the youth, among others.

Share
Retrieved from "https://en.everybodywiki.com/index.php?title=Kwame_Asare-Obeng&oldid=1717438"
Hidden category:
This page was last edited on 13 May 2021, at 19:34.
Content is available under License CC BY-SA 3.0 unless otherwise noted.
This page has been accessed 1,683 times.
Privacy policy
About EverybodyWiki Bios & Wiki
Disclaimers