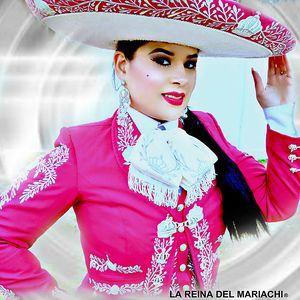 She began singing at local restaurants, clubs and festivals . At a young age she participated in local beauty pageants such as Reina Centro Civico Colombiano, and in Miss Colombia USA. After having participated in beauty Pageants , she began singing at various festivals, such as Festival 5 de Mayo at Flushing meadows Corona Park, Queens New York where many famous Mexican singers performed to celebrate the 5 de Mayo festivities. After participating in many different Festivals, local news media outlets started creating a buzz about her after being impressed by not only her singing voice but because she was the only female Colombian Mariachi singer, and beauty pageant finalist at the same time. This caused widespread interest, among the festival organizers that started introducing her on stage as La Reina Del Mariachi, (the Queen of Mariachi) Name that her audience and fans babtized with.

She was invited to sing at a local event that Promoted Culture, folklore and patriotic values. It was there that an event flyer distributor was promoting a concert that was to be held at Madison Square Garden , concert venue featuring famous latin celebrities in concert. He was impressed by her voice and handed her a flyer,encouraging her to audition the next day for a chance to open the concert. The auditions consisted on singing the Colombian national Anthem. Katherine learned the Colombian national anthem in one day and as soon as it was her turn to audition she forgot the lyrics. She told the judges that she doesn't know the Colombian Anthem but she can sing the American National Anthem instead. A few days later she received a callback stating she was selected. Katherine sang the national Anthem and performed a Mariachi song in front of more than 30,000 people, at the famous Madison Square Garden Arena in New York City.

Katherine performed the Ballad "Por Amarte Asi" a song made famous by Christian Castro on Sabado Gigante, a Television program aired through Univision networks,hosted by Don Fransisco. It featured a segment called "El Exito Del Momento", where they were looking for the next big star. She was selected as one of the top 3 vocal contestants throughout the United States, and landed 2nd Place.

On October 2003, Following local contests in 12 cities across the U.S., six contestants between the ages of 16 and 23 were selected to participate in the "Festival Mariachi desde Disney" talent competition held at Disney World. La Reina Del Mariachi, Katherine Glen was the only winner in the state of New York to compete against 5 other finalists, and the only non-mexican singer. On Univision Network, this 2-hour special included performances by the greats Mariachi Vargas de Tecalitlan, Mariachi Los Camperos de Nati Cano, Mariachi Cobre and a special presentation by Mexican superstar Ana Barbara. She was one of the The six finalists traveled to Disney World and trained under the direction of Steve Carillo, member of EPCOT's very own Mariachi Cobre for the past 21 years. Judged on voice quality, rhythm, intonation, appearance and knowledge of mariachi history, contestants vied for the grand prize of ten thousand dollars. Performing with Mariachi Fiesta Grande, the U.S. backup group used by legend Juan Gabriel, contestants faced celebrity judges.

Known for winning many awards in the state of New York, as Best Mariachi/Ranchera singer,and held that title for more than 3 consecutive years, in a row in awards such as Premios Latinos, where she won "Best Ranchera artist of the year. Best Mariachi Singer in Premios De La Prensa , Also in the Mexican Music Awards, as Best Ranchero Female artist , Best Female Mariachi singer in Premios Gruperos. Best Mariachi singer in Awards such as The golden Voice awards, Pemios El Mexicano, Premios Latino Fama, all as Best Mariachi singer. En Premios Colombia as Best Female artist, The Dominican Music awards as Best Ranchera Singer. She won First Place in the singing talent competition such as Festival chileno 2010, and was the first place winner, in the Festival de la expression artistica mexicana association Tepeyac,and also a first place winner in the 13 festival de la cancion Ranchera where she won first place winner and the Lola Beltran Award.

She was invited as a special guest at the talent competition "La Voz Kids",(The Voice Kids) aired through Telemundo Networks auditions where she gave young aspiring singers advice on music, voice, and on how to follow their dreams. She was a guest celebrity on Telemundo Accesso Total aired through Telemundo networks and was present at the prestigious Premio Lo nuestro Award, where she walked down the red carpet and interviewed many latin celebrities.

Start writing your article here after clicking the "Edit" link at the top of this page. Don't insert paragraph above.

Share
Retrieved from "https://en.everybodywiki.com/index.php?title=La_Reina_Del_Mariachi&oldid=2127086"
Hidden categories:
This page was last edited on 31 October 2021, at 01:23.
Content is available under License CC BY-SA 3.0 unless otherwise noted.
This page has been accessed 7,164 times.
Privacy policy
About EverybodyWiki Bios & Wiki
Disclaimers