The Labrador Husky is a specific purebred dog. It is commonly mistaken for a Husky-Lab mix but in fact, it is its own breed. The Labrador Husky was originally brought to what is currently known as Labrador, Canada, in the 1300s by the Inuit.[1] Its main purpose was to help the Inuit survive in a highly demanding environment. The Labrador Husky was trained to pull sleds that transported goods.[2] Labrador Huskies are known to be large but gentle dogs. The breed can grow to be bigger than the more commonly known Siberian Husky weighing in at 60-100 pounds. The dogs were later adapted to serve as a family pets. Labrador Huskies are good with children when trained properly and require a committed owner to maintain their needs. Some of these needs include proper grooming which involves regular brushing of its thick double coat. This breed does tend to have some serious health problems, including hip dysplasia, but in general, Labrador Huskies live anywhere between 10 - 13 years.[3]

The Labrador Husky originated in Labrador, the northern mainland region of what is currently called the Canadian province of Newfoundland and Labrador. The breed was brought to the area by the Thule Inuit in 1300 AD.[4] Although Labrador Huskies were once very closely related to other Northern husky breeds, like the Siberian Husky, they became isolated in Labrador thus develop independently of the other breeds.

Their history of being bred with wolves does not mean that they are wolf-dogs, nor do they have any recent wolf ancestry. However, they still retain some of their wolf-like physical features. Although they have been isolated, some Labradorian people have introduced the blood of the Alaskan Malamute in order to improve its sledding skills and later for trainability purposes, the German Shepherd Dog.[3] This has created another sled dog that looks strikingly similar to the Siberian Husky, but is much larger and more wolf-like.

This breed had helped people to lead sleds until snowmobiles were invented. From then on, it got much less common for the dog to be used as a sled dog to lead heavy loads.[4] These days, it is often the case that the breed is seen in dog races or helps to find and save lost people. However, most people have the dogs as their house pets now.[2] 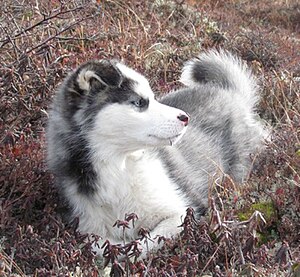 Labrador Huskies have several health problems that can impair their bodies. These issues are similar to those that are commonly found in the Siberian Husky. One of the most prominent health issues is musculoskeletal issues, including hip dysplasia. Hip dysplasia is common and its effects on dogs' quality of life is immense. If left untreated the dog will lose mobility of their leg and be in great discomfort.[5] The Labrador husky can also be in danger of gastric dilation volvulus, simply known as bloat. Common health problems that associate with this breed are arthritis, degenerative myelopathy, eye and skin disease. Cataracts can affect this breed so, severe the victim can go blind. Heart disease, laryngeal paralysis and epilepsy can affect the Labrador Husky.[6] These health concerns can end the life of the breed early. Despite all these dangers, the lifespan is from 10–13 years.[3]

The Labrador Husky was used primarily as a working dog. This dog was not thought of as a pet but rather as an animal used for the benefit of the people who put it to work. It was commonly thought that this type of dog was not a friendly breed and would not be good in a family setting primary because of its past.[2] This notion has since been disproven, as the Labrador Husky has become a fairly common family pet.[citation needed] There are still groups of people like the Labrador Inuit and Metis who use the Labrador Husky in or its original, working form for recreational dog sledding and some even prefer to use a dog team instead of a snowmobile. Sled dog racing continues to be a winter pastime in Labrador, with long races similar to the Iditarod still happening today.[4]

The process of training a Labrador Husky does not stray far from what you would do in order to train a more commonly known family dog like a Golden Retriever.[7] Because of its extremely high level of intelligence, the Labrador Husky must be very well trained.[2] This breed of dog is known to respond well to training by an owner or professional who uses positive reinforcement.[3] It is best to start training while these dogs are still puppies so that no bad habits develop.[8] Lack of training and an owner who is not committed to the dog's overall needs will prove to be detrimental to the dog's behavior. The Labrador Husky loves to be surrounded by other dogs for companionship.[2] Contact with other dogs and humans is vital for the dogs overall mental health and ability to be able to function in an urban setting. They are now often kept as a house pet.

The Labrador Husky has a similar temperament to other Northern breeds such as Siberian Husky, Alaskan Husky, Alaskan Malamute, and Canadian Eskimo Dog. It rarely barks but does tend to howl.[4] The breed can be friendly and not aggressive with strangers and is well behaved if socialized properly. They are also good at getting along with family members and are intelligent and loyal animals.[2] These dogs often do well with children as well, especially if reared with them together.[3]

Being with other dogs makes them happier because they are bred to work well in a pack. However, its strong prey drive might make it dangerous for owners to have smaller pets with it, but if they meet each other in their early ages, it should be safe.[2]

Owners need plenty of time to take care of the dogs because they require a good deal of exercise and owners' attention as well as mental stimulation.[2]

The Labrador Husky is a fairly large dog that can weigh between 60 and 100 pounds and can grow to 20 - 28 inches. Thick, double coated fur protects these dogs from the bitterly cold temperatures that come with Labrador's long winters.

The husky's head is broad and has a long, narrow muzzle. The chest is wide and heavy boned. The husky's muscular and stout body is a unique physical trait, especially when compared to a Siberian Husky. Coat colours include solid white, solid black, black and white, red and white, and grey and white. There are two rare coat colours that can also be found in this breed: wolf grey and solid grey. Any coat colour can appear in any litter; the most common colours are black and white, grey and white, and solid black.[2]

This breed has existed for hundreds of years and has become a unique breed due to its isolation from other northern dog breeds over this time. Labrador Huskies were used for transportation for many years until the advent of the snowmobile.

Today, in isolated communities in northern Labrador, spaying and neutering is extremely expensive and logistically difficult. Dog breeding is therefore largely unmonitored and uncontrolled. This has resulted in a great variety of Labrador Husky mixes. It is unclear how many "purebred" Labrador Huskies are left in their region of origin, but many of the mixes retain that distinctive wolf-like facial shape.

Of all the northern dog breeds, the Labrador Husky is one of the rarest, with less than an estimated 50-60 purebred Labrador Huskies currently identified in Labrador.[9]

Labrador Huskies require extensive grooming during all parts of the year.[3] Its extremely thick and durable coat, also known as a double coat,[10] was made to be able to withstand harsh winters in Labrador Canada.[11] Daily brushing is required to maintain the coat.[3] A bath is sometimes the best way to fully groom and clean the dog. Bathing the dog does not have to be done on a regular basis, but is important in order to ensure a clean and well-groomed dog. It is also vital that the owner of a Labrador Husky checks for fleas and ticks during the warmer months.[8] Because this dog has such a thick coat, it is the perfect place for a tick or flea to nestle in. Not checking for these things can lead to serious problems such as Lyme disease,[12] which can be life-threatening to the dog. The Labrador Husky sheds constantly throughout the year, so it is important to keep up with its grooming.

Retrieved from "https://en.everybodywiki.com/index.php?title=Labrador_Husky&oldid=920181"
Category:
Hidden categories:
This page was last edited on 4 August 2020, at 16:58.
This page has been accessed 200 times.
Content is available under License CC BY-SA 3.0 unless otherwise noted.
Privacy policy
About EverybodyWiki Bios & Wiki
Disclaimers