From EverybodyWiki Bios & Wiki
Jump to:navigation, search
‹ The template Infobox UK place is being considered for conversion to a wrapper. ›

Lewsey Farm is a suburb of Luton, England. Situated in the north-west of the town, the area is roughly bounded by the Woodside Link to the north, Leagrave High Street to the south, Poynters Road to the west, and Pastures Way to the east. The wider area including nearby Lewsey Park is sometimes referred to as Lewsey Farm.[1][2]

Lewsey Farm takes its name from the former farm on the site of the modern suburb, 'Lewsey Farm'. Poynters Road, which passes by Lewsey and forms the border between Luton and Dunstable, was named after Poynters Farm which was slightly to the north of Lewsey Farm. Lewsey Farm was situated on land belonging to the Lucy (Lewsey) family (who owned the manor from 1305 to 1455). The manor then passed to the Wingate family who were the lords of the manor of Toddington. The old manor house stood partly in the parish of Luton and partly in the parish of Houghton Regis; most of the manor buildings were destroyed by fire in 1832.[3]

Lewsey Farm was built on land north of Lewsey in the 1960’s and 1970’s. When it was built there was still open land to the east and north of the suburb, until the suburb of Lewsey Park was built to the east a few decades later.[4] A large amount of the houses were social housing, built in the typical style of the time, straight roads of square yellow or grey brick built terraced houses.

At the centre of Lewsey Farm is St. Dominic’s Square, the local shopping area. This includes a greengrocer, post office, newsagent, supermarket, chemist, a co-op, and a general store selling halal meat.

The area is served by St. Martin de Porres Roman Catholic Church, at the corner of Leagrave High Street and Pastures Way.[5] Lewsey Farm also has a doctors surgery and pharmacy in the north of the area, Wheatfields Surgery.[6] Regis Road recreation ground is in the area, which includes a park and play facilities.

Lewsey Farm is part of the larger Lewsey ward, which also includes Lewsey and Lewsey Park. The ward is represented by Cllr Joan Bailey (Labour), Cllr Aslam Khan (Labour) and Council leader Cllr Hazel Simmons (Labour).[7] The ward forms part of the parliamentary constituency of Luton North, and the MP is Kelvin Hopkins (Labour). Lewsey is within the East of England (European Parliament constituency). 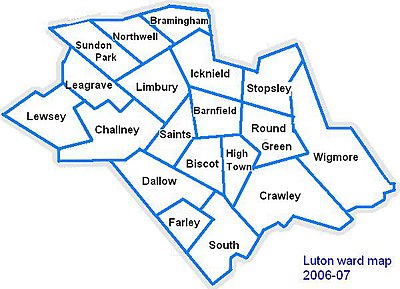 Two weekly newspapers are delivered free to all houses in Lewsey, with news about Luton and the surrounding area.

Retrieved from "https://en.everybodywiki.com/index.php?title=Lewsey_Farm,_Luton&oldid=921645"
Category:
Hidden categories:
This page was last edited on 5 August 2020, at 02:28.
This page has been accessed 452 times.
Content is available under License CC BY-SA 3.0 unless otherwise noted.
Privacy policy
About EverybodyWiki Bios & Wiki
Disclaimers