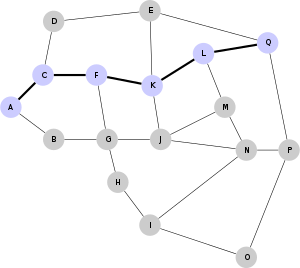 The Lightning Network is a "Layer 2" payment protocol that operates on top of a blockchain-based cryptocurrency (like Bitcoin). It enables fast transactions among participating nodes and has been touted as a solution to the Bitcoin scalability problem.[1][2] It features a peer-to-peer system for making micropayments of cryptocurrency through a network of bidirectional payment channels without delegating custody of funds.[3] Lightning Network implementation also simplifies atomic swaps.

Normal use of the Lightning Network consists of opening a payment channel by committing a funding transaction to the relevant base blockchain (Layer 1), followed by making any number of Lightning transactions that update the tentative distribution of the channel's funds without broadcasting those to the blockchain, optionally followed by closing the payment channel by broadcasting the final version of the settlement transaction to distribute the channel's funds.[4]

To perform as intended, Lightning Network required a transaction malleability fix in the Layer 1 blockchain, such as Segregated Witness (SegWit) in Bitcoin.[5][3]

The lightning network has been described as Bilateral netting by FT Alphaville.[6]

Joseph Poon and Thaddeus Dryja published a draft of the Lightning Network white paper in February 2015.[7][8]

In 2017 the Bitcoin community activated SegWit which enabled second layer solutions such as the Lightning Network.[8]

In January 2018 Blockstream launched a payment processing system for web retailers. Blockstream noted that Lightning was live on the Bitcoin mainnet with 60 nodes operating as of January 18, 2018, but that it should be considered to be "in testing" at that time.[citation needed]

On March 15, 2018, Lightning Labs CEO Elizabeth Stark announced the initial release of lnd 0.4-beta for developers, with the intent on making it available for testing purposes on the main Bitcoin network with Litecoin support. That month, Stellar CTO Jed McCaleb announced that the Stellar Network would be implementing a protocol inspired by the Lightning Network.[citation needed] The network was also endorsed by mobile payment entrepreneur Jack Dorsey.[9]

Andreas Antonopoulos has referred to the Lightning Network as a second layer routing network.[10]:ch. 8

On March 20, 2018, Lightning Network nodes faced a Distributed Denial of Service (DDoS) attack that sent around 200 nodes offline, down from around 1,050 to 870. The exploit used as many node connections as possible to prevent any new connections.[11] A month earlier in February, Bitcoin Core developer Peter Todd said the Lightning protocol could very well "prove to be vulnerable to DoS [denial of service] attacks in its current incarnation."[citation needed]

On January 19, 2019, pseudonymous Twitter user hodlonaut began a game-like promotional test of the Lightning network by sending 100,000 satoshis (0.01 Bitcoin) to a trusted recipient where each recipient added 10,000 satoshis ($0.34 at the time) to send to the next trusted recipient. The "lightning torch" payment reached notable personalities including Twitter CEO Jack Dorsey, Lightning Labs CEO Elizabeth Stark, and Binance CEO "CZ" Changpeng Zhao, among others.[12][13] The lightning torch was passed 292 times before reaching the formerly hard-coded limit of 4,390,000 satoshis. The final payment of the lightning torch was sent on April 13, 2019 as a donation of 4,290,000 satoshis ($217.78 at the time) to Bitcoin Venezuela, a non-profit that promotes Bitcoin in Venezuela.

The payment channels allow participants to transfer money to each other without having to make all their transactions public on the blockchain.[14][15] This is done by penalizing uncooperative participants. When opening a channel, participants must commit an amount (in a funding transaction, which is on the blockchain).[16] Time-based script extensions like CheckSequenceVerify and CheckLockTimeVerify make the penalties possible.

The CheckSequenceVerify (CSV) Bitcoin Improvement Proposal details how Hash Time-Locked Contracts are implemented with CSV and used in Lightning: BIP 0112.

Commitment transactions allow multiple users to participate in a single transaction (and thus act as a single entity), using a multi-key system. Determination of congestion falls primarily on the miners, so this network rests on the assumption that honest miners will not organize a 51% attack.

Since commitment transactions spend the funding transaction, they must be signed by both partners.

Suppose Alice decides to pay Bob 0.25 mBTC (before this, each owns 1 mBTC):[citation needed]

There are several benefits to using the Lightning Network compared to on-chain transactions:

The Lightning Network is made up of bidirectional payment channels between two nodes which combined create smart contracts. If at any time either party drops the channel, the channel will close and be settled on the blockchain.

Due to the nature of the Lightning Network's dispute mechanism, which requires all users to watch the blockchain constantly for fraud, the concept of a "watchtower" has been developed, where trust can be outsourced to watchtower nodes to monitor for fraud.

The original whitepaper in reference to routing suggests that "eventually, with optimizations, the network will look a lot like the correspondent banking network, or Tier-1 ISPs".

BOLT (Basis of Lightning Technology) specifications were drafted in late 2016.[20] Several implementations were made:

Cryptocurrency exchanges such as Bitfinex use it to enable deposits and withdrawals.[21] Laszlo Hanyecz, who gained fame in the cryptocurrency community for paying 10,000BTC for two pizzas in 2010, bought two more pizzas in 2018 using lightning and paid 0.00649BTC.[22]