Jasir Cooke (born January 18, 2006), known professionally as Lil Astroid, is an American rapper, singer, songwriter, record producer, video director, skateboarder, skate shop owner and fashion designer. He was founder of a hip hop collective named Nostalgic Habitat, Cooke has created most of the artwork for his merchandise and song covers. As a solo artist, Cooke has release and two studio albums, often handling most voice production himself. 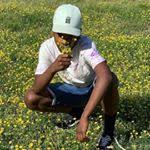 Lil Astroid at a field of flowers in 2019

Jasir Cooke was born on January 18, 2006 in Virginia, Cooke spent most of his life in Virginia. At the age of seven, he would pretend to be Michael Jackson and do his dances to his songs.. At the age of 12, Cooke started learning how to make music and produce his own vocals. Cooke started meeting friends with the same musical interest. He eventually created the collective Nostalgic Habitat.

Cooke says got bullied a little bit for what he does and tries to become, but he said he keeps humble and keeps going. At age 13 he produced 2 albums, made 2 clothing brands (OGGY & LSV), 1 skate brand (ØNBOARD), and his own record label (Nostalgic Music). His parents helps him with some of the equipment.

Up and coming rapper Lil Astroid created and signed to his label Riot Records (now Nostalgic Music) and released his debut single "Kid From the North Pole" on November 28, 2018. It reached over 1,800+ plays on Soundcloud and was released on all platforms such as Google Play Music, Apple Music, Spotify etc. Astroid has experimented with other genres such as Alternative/Indie, Hip-Hop/Rap, Pop, Indie Pop/Neo-Soul etc.