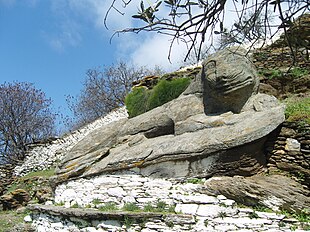 Lion of Kea, 6th century BC

Lion of Kea is name of colossal archaic sculpture of a guardian lion, chieseleded from a single blok of local limestone, probably in a 6th century BC, on an island of Kea, Greece, when island`s name was Cheos.

Almost nothing else is konown about this 9 m long sculpture, which even today stands in situ near the island`s willage of Ioulida.

Retrieved from "https://en.everybodywiki.com/index.php?title=Lion_of_Kea&oldid=922213"
Categories:
This page was last edited on 5 August 2020, at 05:08.
This page has been accessed 101 times.
Content is available under License CC BY-SA 3.0 unless otherwise noted.
Privacy policy
About EverybodyWiki Bios & Wiki
Disclaimers
Mobile view