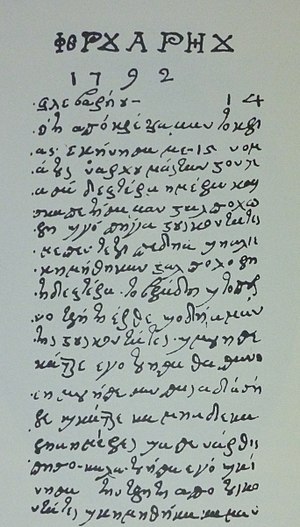 A page of the diary of Fotos Tzavellas. Header: ΦΕ[Β]ΡΟΥΑΡΙΟΥ (February) 1792

Souli is a toponym and today a municipality in Epirus, northwestern Greece. It is historically important as the former settlement of Souliotes, a semi-autonomous community of warriors who played a vital role in the Greek War of Independence (1821–c.1829). For this reason, Souli and Souliotes attracted the attention of many authors, travellers, historians, ethnologists etc. from early 19th century. There are also some late 18th century documents written by Souliotes, which later became the subject of academic research. The traditional Souliotic communities were dissolved during the Greek War of Independence and Souliotes were dispersed.

Retrieved from "https://en.everybodywiki.com/index.php?title=List_of_18th_–_early_19th_century_sources_on_Souli_and_Souliotes&oldid=922325"
Categories:
This page was last edited on 5 August 2020, at 06:44.
This page has been accessed 640 times.
Content is available under License CC BY-SA 3.0 unless otherwise noted.
Privacy policy
About EverybodyWiki Bios & Wiki
Disclaimers