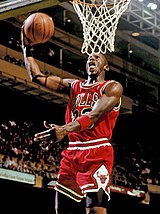 Michael Jordan is an American former basketball player who spent 15 seasons in the National Basketball Association (NBA), 13 as a member of the Chicago Bulls and 2 playing for the Washington Wizards. Jordan's scoring achievements include the following NBA records: 10 scoring titles, of which 7 were in successive seasons; career averages of 30.12 (regular season) and 33.45 (playoffs) points per game; 63 points in a single playoff game and eight 50-plus point games in the playoffs. Jordan is ranked fifth on the all-time regular season scoring list, with 32,292 total points, and second all-time on the playoff scoring list, with 5,987 total points. Jordan is also one of 5 players in NBA history to log multiple 60-point games, and, along with Elgin Baylor, the only player to score 60 or more points in a playoff game.

Jordan scored 40 or more points in a game 173 times in the regular season and 38 times in the playoffs, for a total of 211 games, which place him second on the all-time list (behind Wilt Chamberlain's 284 games).

Share
Retrieved from "https://en.everybodywiki.com/index.php?title=List_of_40-plus_point_games_by_Michael_Jordan&oldid=922348"
Categories:
Hidden category:
This page was last edited on 5 August 2020, at 06:50.
Content is available under License CC BY-SA 3.0 unless otherwise noted.
This page has been accessed 3,725 times.
Privacy policy
About EverybodyWiki Bios & Wiki
Disclaimers