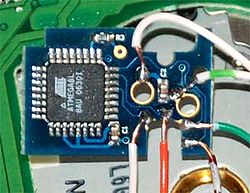 An installed Wiikey, one of the most popular Wii modchips

Wii drivechips are electronic devices that modify or disable the built-in restrictions of the Nintendo Wii video game console. At present, all modchips operate by physically modifying the Wii’s DVD drive. As a result, they are often referred to as drivechips. Most modchips are capable of circumventing region coding and copy protection, which allows users to play games created in different regions, load burned discs, and use third-party homebrew software.

There have been reports of bricking (rendering the unit inoperable due to an incompatible firmware update) of a small number of Wii consoles after the installation of an update to System Menu 3.0,[1] released on 7 August 2007, in which Nintendo warned explicitly that modded consoles could be rendered inoperable after installation.[2]

Note that all D3-compatible chips are "plug and play", limited to a 3x disc read speed, and most have issues with streaming GameCube audio. For any chip to work on a D3-2 or D4 drive, a source of external storage (i.e.- USB flash drive) is necessary.

Retrieved from "https://en.everybodywiki.com/index.php?title=List_of_Wii_drivechips&oldid=923716"
Categories:
This page was last edited on 5 August 2020, at 14:08.
This page has been accessed 221 times.
Content is available under License CC BY-SA 3.0 unless otherwise noted.
Privacy policy
About EverybodyWiki Bios & Wiki
Disclaimers