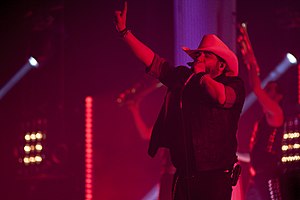 Malcolm Arison live on stage with The BossHoss

Malcolm Arison live on stage in 2008

Malcolm Arison is a British multi instrumentalist and film music composer, most famous for his harmonica playing[1] for German charting band The BossHoss and through various collaborations including Udo Lindenberg and Samy Deluxe amongst many others.

Malcolm Arison was born in Manchester, UK. He started playing the guitar and harmonica when 14 years old, inspired by early pre-war and 50's blues music.

Music being a great inspiration from early on, he would spend his days practicing harmonica and going out to see punk rock shows.

Malcolm left home aged 18 to fully concentrate on his music. Travelling throughout Europe, he earned his money busking.

His music, influenced both by blues classics and punk music, was refined throughout his trips which mainly led him to Switzerland and Germany.

Falling in love with Berlin, he settled in Berlin in 1981 and started playing in local Bars.

Working as a session musician at Hanse Studios in Berlin, he wrote and recorded harmonica tracks for famous German artists such as Nena, Ben Becker,[2] Juliane Werding and many others, often contributing to their lyrics, too.

Besides his session work, Malcolm Arison was active composing soundtracks for various movie productions, including „Hände weg von Mississippi“ by Detlef Buck and collaborations with Richard Pappick from Elements of Crime.

This led to him meeting Alec Völkel and Sascha Vollmer in 2005, who had just started a band, called The BossHoss and had successfully released a first major album.

Replacing the original harp & mandolin player for a tour in 2005, he joined the band full-time after the tour for their next album.

He still actively tours and records with The BossHoss as well as composing and recording film music for cinema productions and collaborating with other artists.

Share
Retrieved from "https://en.everybodywiki.com/index.php?title=Malcolm_Arison&oldid=927887"
This page was last edited on 6 August 2020, at 20:41.
Content is available under License CC BY-SA 3.0 unless otherwise noted.
This page has been accessed 516 times.
Privacy policy
About EverybodyWiki Bios & Wiki
Disclaimers