Claudet was born in Lockport, Louisiana. He graduated high school in 1966 from Holy Savior Central High School in Lockport. After graduation, he chose Louisiana State University as his college, where he obtained a Bachelor of Science degree in 1970 allowing him to take the test to be certified as a CPA. While working full-time as a CPA, he went on to further his education and graduated in 1977 from Loyola Law School with a Juris Doctorate.[4] 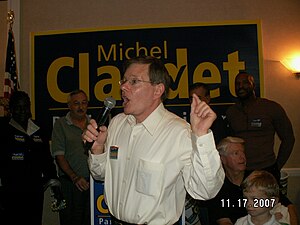 Claudet announced his candidacy for Parish President in August 2007 with his "New Way" campaign. After months of campaigning, he faced off against Sheriff Jerry Larpenter, Former Parish President Barry Bonvillain, Businessman Mike Fesi II and Solid Waste Director Eulin Guidry in the October 20 primary election. No candidate receiving a majority of the votes cast, Claudet (31%) and Larpenter (37%) were elected to go against each other in a run off election.[5]

On November 17, voters went back to the polls and chose the political newcomer, Claudet (53%) over the popular incumbent Sheriff, Larpenter (47%) in what was considered to be a major political upset.[6][7]

Share
Retrieved from "https://en.everybodywiki.com/index.php?title=Michel_Claudet&oldid=932969"
Categories:
Hidden categories:
This page was last edited on 8 August 2020, at 15:12.
Content is available under License CC BY-SA 3.0 unless otherwise noted.
This page has been accessed 1,288 times.
Privacy policy
About EverybodyWiki Bios & Wiki
Disclaimers