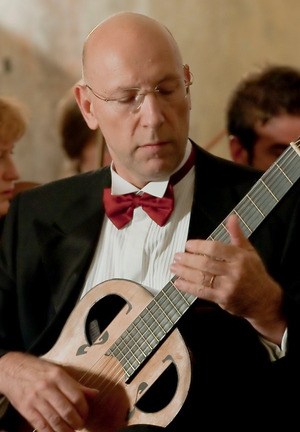 Michele Greci (13 May 1952 in Anacapri, Italy) is an italian guitarist, lutist and a full guitar professor at the “Domenico Cimarosa” State Conservatory (Conservatorio Statale) of Avellino.

Born in Anacapri on 13 May 1952, he graduated in musicology with address "Guitar soloist" and with flying colors. As a concert player he has played for many prestigious musical associations, in Italy and abroad, as well as for the national radio. Expert in the history of musical instruments, he was a founding member of the now defunct Italian Paleographic Association, created for the diffusion of ancient music. He wrote the first essay on guitar published by the "Nuova Rivista Musicale Italiana" (ed. RAI), and is the author of numerous articles and essays in specialized magazines.

Greci also worked for many years with ENEA in the research of a non-destructive interferometric method for the analysis, restoration and preservation of musical instruments. As a researcher of applied musical acoustics, he devised and built the Greci guitar, a new type of classical guitar that solves some of the problems of the classical guitar. A model of this guitar was donated to Pope John Paul II, who placed it in his private collection.[1][2]

Retrieved from "https://en.everybodywiki.com/index.php?title=Michele_Greci&oldid=932995"
This page was last edited on 8 August 2020, at 15:27.
This page has been accessed 322 times.
Content is available under License CC BY-SA 3.0 unless otherwise noted.
Privacy policy
About EverybodyWiki Bios & Wiki
Disclaimers