This article "Mira variables" is from Wikipedia. The list of its authors can be seen in its historical. Articles copied from Draft Namespace on Wikipedia could be seen on the Draft Namespace of Wikipedia and not main one. A Mira variable is a type of pulsating red giant star that changes its luminosity, temperature, and diameter/radius over an indefinite period of time exceeding 100 days. They are in the very late stages of stellar evolution and are on the asymptotic giant branch that will expel their outer layers as planetary nebulae and become white dwarfs within the span of a few million years.

File:Mira-star.jpg
Close-up image of Mira A.

Mira, also known as Omicron Ceti, is a popular star system located between 200 to 400 light years away from Earth in the Cetus constellation. Mira A and B are separated by 100 AU. Mira A often fades out of visibility and back with an apparent magnitude of 2.0 to 10.1. The Mira system has a tail of gas 13 light years long and is travelling through space.

Mira B, also known as VZ Ceti, is a small white dwarf. It is surrounded by a protoplanetary disk. Its orbit around Mira is 500 years.

In 2007, observations hinted that Mira B is rather a orange main-sequence star of with a mass of 0.7 solar masses than a white dwarf. However, a 2010 analysis of rapid optical brightness variations has indicated that this star is a white dwarf.

W Hydrae is a Mira-type red giant star located in the constellation Hydra. When viewed through infrared light, it has a magnitude of -1.7,[1] making it 7th brightest star in the night sky, even brighter than Sirius. It has a diameter between 229[2] to 560[3] times greater than the Sun's, but at the same time, its mass is less than 1 solar mass. The star is orbited by a wide disk of water vapor emissions.[4]

R Doradus is a red giant located 178 light years away from Earth in the constellation Dorado.[5] It has the largest angular diameter of any known star at 0.057 arcseconds. It has a diameter of 515 million km, which is equal to 370 R☉.[6] 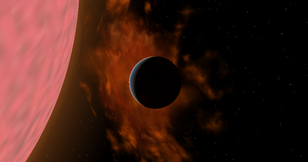 R Leonis is a Mira variable located in the Leo constellation 267 light years away from Earth with a diameter 350 times greater than the Sun's, a temperature from 2,930 to 3,080 degrees Kelvin,[7] and a bolometric luminosity 5,617 times greater.[8]

In 2009, Wiesemeyer et al. proposed that quasi-periodic fluctuations observed for the star R Leonis may be due to the presence of an evaporating substellar companion, possibly an extrasolar planet. They have inferred a putative mass for the orbiting body which is twice the mass of Jupiter, an orbital period of 5.2 years and likely orbital separation of 2.7 astronomical units. If confirmed such a planetary object could likely be an evaporating planet, with long comet-like trail as hinted by intense SiO maser emissions.[9] 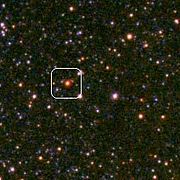 T Cephei is circled in the image.

T Cephei is a Mira variable star located in the Cepheus constellation 190 parsecs away from Earth and changes its magnitude over a period of 388 days.[10] T Cephei is a red giant with a spectral type of M6-9e with an effective temperature of 2,400 Kelvin, a radius of 329 R☉, and a luminosity of 5,700 L☉. If it were in the place of the Sun, its photosphere would at least engulf the orbit of Mars.[11]

Chi Cygni is a Mira variable located in the Cygnus constellation. Despite having a Bayer designation, at times it can fall dimmer than apparent magnitude 14.2 .[12] Estimated to be 550 light years away from Earth,[13] the star is believed to be of spectral class S[14] and pulsates between 316 to 737 R☉.[15][16]

You have to Sign in or create an account to comment this article !<comment-streams/>
Retrieved from "https://en.everybodywiki.com/index.php?title=Mira_variables&oldid=58682"
Categories:
Hidden category:
This page was last edited on 9 August 2018, at 05:58.
This page has been accessed 103 times.
Content is available under License CC BY-SA 3.0 unless otherwise noted.
Privacy policy
About EverybodyWiki Bios & Wiki
Disclaimers
Mobile view