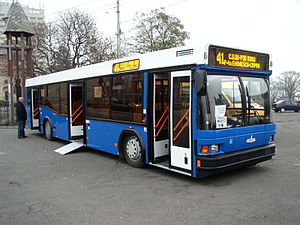 Motor bus or motorbus is a now somewhat archaic term referring to a bus powered by an onboard internal combustion engine, as opposed to a horse-drawn bus, steam bus or trolleybus.[1] Motor buses began appearing on public roads shortly before the turn of the 20th century, and by 1905 were a significant feature of, e.g. the streets of London.[2] They are now commonly referred to simply as "buses".

The term "motor bus" continues in occasional use in North America, in particular when distinguishing internal-combustion-engined buses from trolleybuses, as North American English commonly regards the latter as a type of bus – and normally spells the term as two words, "trolley bus". In American English, motor coach is sometimes used as a synonym for "motor bus", as "trolley coach" is likewise considered a synonym for "trolley bus",[3] but the "coach" variants of both terms are older terms that are now used much less commonly than the "bus" variants. "Motor coach" is not a synonym for motor bus in British English, where "coach" has a narrower meaning, but the meaning of "coach" in American English is more broad[4] and can refer to a transit bus.

Although many early motor buses were equipped with a petrol (gasoline) engine, since about the 1940s the overwhelming majority of them have been powered by a diesel engine via a mechanical transmission. Towards the end of the 20th century, the emergence of other, alternative, forms of propulsion, such as compressed natural gas engines and hybrid electric motors (using a generator powered by a smaller diesel engine), have brought about a significant reduction in the proportion of new motor buses fuelled by diesel.

In the first few decades of the history of motor buses, limitations in internal combustion engine technology, along with other disadvantages, made motor buses relatively uncompetitive in urban applications by comparison with trams (streetcars), and later trolleybuses, and in interurban and regional public transportation by comparison with interurban railroads and other passenger trains. For that reason, the urban tramway networks that were closed down prior to the 1950s were commonly replaced by trolleybus systems instead of transit motor bus networks.

As the 20th century proceeded, however, improvements in motor bus technology, the expansion of road systems, and the use of more vigorous, sometimes even ruthless, marketing techniques in the promotion of motor buses, had a major effect.

By the start of the 1970s, most of the urban tramway networks and trolleybus systems, and interurban railroads, in the English-speaking world had been closed down, to be replaced by motor buses. In some cases, these closures occurred just in time for the 1973 oil crisis, which started to swing the pendulum back towards transport powered by means other than internal combustion.

This article "Motor bus" is from Wikipedia. The list of its authors can be seen in its historical and/or the page Edithistory:Motor bus. Articles copied from Draft Namespace on Wikipedia could be seen on the Draft Namespace of Wikipedia and not main one.

Retrieved from "https://en.everybodywiki.com/index.php?title=Motor_bus&oldid=935110"
Category:
Hidden categories:
This page was last edited on 9 August 2020, at 07:04.
This page has been accessed 799 times.
Content is available under License CC BY-SA 3.0 unless otherwise noted.
Privacy policy
About EverybodyWiki Bios & Wiki
Disclaimers