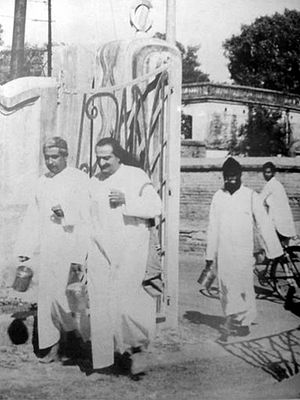 The New Life was a period of renunciation, pilgrimage, and spiritual adventures undertaken by the Indian spiritual teacher Meher Baba on October 16, 1949.[1] Baba selected twenty companions to join him in this self-described life of complete reliance on God, telling his companions, "Life during that period will be lived at the mercy of the world. It will be a life of complete helplessness and hopelessness."[2]

After making provisions for those dependent on him, Meher Baba and his companions otherwise gave up all property and financial responsibilities. They then traveled about India incognito, without money, begging for their food, carrying out Baba's instructions and living in strict accordance with a set of "conditions of the New Life." These included absolute acceptance of the circumstances of their lives, and consistent good cheer in the face of any difficulty. Those companions who failed to comply were sent away. This phase of Meher Baba's life culminated in early 1952 after more than two years.

This New Life is endless, and even after my physical death it will be kept alive by those who live the life of complete renunciation of falsehood, lies, hatred, anger, greed and lust; and who, to accomplish all this, do no lustful actions, do no harm to anyone, do no backbiting, do not seek material possessions or power, who accept no homage, neither covet honor nor shun disgrace, and fear no one and nothing; by those who rely wholly and solely on God, and who love God purely for the sake of loving; who believe in the lovers of God and in the reality of Manifestation, and yet do not expect any spiritual or material reward; who do not let go the hand of Truth, and who, without being upset by calamities, bravely and wholeheartedly face all hardships with one hundred percent cheerfulness, and give no importance to caste, creed and religious ceremonies. This New Life will live by itself eternally, even if there is no one to live it.[4]

Song of the New Life[edit]

In October 1949, as the New Life commenced, disciple of Meher Baba and New Life companion Dr. Abdul Ghani Munsiff wrote a "new life song" (or "Song of the New Life") in Hindi, including some edits by Meher Baba (the first verse from Meher Baba directly), which was then translated into English:[10]

Listen to the silent words of Meher Baba;
The life-story of all lovers of God is based on the practice of these words.
If you are serious about living this New Life,
Then wholeheartedly renounce this ephemeral existence.

We have taken to this life, in which we rely only on God;
In this, our will [to do or die] is strengthened by the oath taken;
We are merrily singing the song of hopelessness;
We are inviting all calamities and difficulties.

We neither wail over lost hopes, nor complain about broken promises;
We neither covet honor, nor shun disgrace;
Backbiting we know not, nor do we fear anyone;
This is now the color of our New Life.

No confusion in the mind now, nor any ties left;
Pride, anger, lust and greed we know not.
We have no religion, nor care for physical and mental fads.
The Sheikh and the Brahmin [typifying all castes and creeds] are now sailing in the same boat.

There is no small or great now, for us all;
The questions of disciple, Master or Godhood no longer arise.
Brotherliness or fellow-feeling is the link that exists,
And this contributes to our present enjoyment of suffering.

This world or the next, hell or heaven, we no longer bother about;
Shaktis and siddhis, occultism and miracles, we no longer think of.
All these false impressions [thoughts] for us have been purged from the mind.
What has value and importance for us now, is to live in the active present.

Dear ones, take seriously the words of Baba when he says:
"Although now I am on the same level with you all,
Yet all orders from me, good, bad, extraordinary,
You should all carry out immediately, leaving the result to God."

Even if the heavens fall,
Do not let go the Hand of Truth.
Let despair and disappointment ravage and destroy the garden [of your life];
Beautify it once again by the seedlings of contentment and self-sufficiency.

Even if your heart is cut to bits, let there be a smile on your lips.
Here I divulge to you a point worth noting:
Hidden in your penniless hands is Treasure untold;
Your beggarly life will be the envy of kings!

God exists indeed, and true are the Prophets.
Every cycle has an Avatar, and every moment has a wali.
For us, however, it is only hopelessness and helplessness.
How else should I tell you what our New Life is?[11][12]

Culmination of New Life and Manonash[edit]

The New Life travels ended in the semi-desert plains of Northwestern India, during October to December 1951, through a new phase called Manonash (Annihilation of Mind). As indicated by Baba, the Manonash work was carried out for "the abnegation of the personal will in the Divine Volition."

From 15 to 24 October 1951, for ten days, Meher Baba maintained periods of fasting, meditation, and seclusion inside a rock cave on a hill top, surrounded by a dargah of Harzat Baba Fakhruddin, and an old temple of Vishnu, near Khajaguda. On 16 October 1951, Eruch, one of the five companions, carried with him a box of five models containing a temple, a mosque, a church, a pagoda, and an agyari (Parsi fire temple), inscribed with alabaster on a marble stone. The five models represented the major religions of the world: Hinduism, Islam, Christianity, Buddhism, and Zoroastrianism. Eruch arranged them on a ledge inside the rock cave.[13]

Meher Baba conveyed that the spiritually significant work of Man-O-Nash was done on behalf of the spiritual welfare of all humanity.

In the afternoon of October 24, 1951, Baba, with the five companions Gustadji, Baidul, Pendu, Eruch and Daulat Singh, left Khajaguda Pahad with their baggage. It took the group about a month to reach Seclusion Hill at the back of Meherazad by foot from Khajaguda hill to Meherazad hill.

The book Glimpses of the God Man Meher Baba, by Bal Natu, cites Baba's message on the annihilation of mind during the Manonash meeting at Hyderabad.[14]

In October 1949, at the age of 55, Meher Baba embarked with twenty companions, four women and sixteen men mandali. They are listed here with their respective ages at the time.[15]

Share
Retrieved from "https://en.everybodywiki.com/index.php?title=New_Life_(Meher_Baba)&oldid=937954"
Category:
This page was last edited on 9 August 2020, at 20:07.
Content is available under License CC BY-SA 3.0 unless otherwise noted.
This page has been accessed 341 times.
Privacy policy
About EverybodyWiki Bios & Wiki
Disclaimers