The Statue of Liberty in New York Harbor is an iconic symbol of the city, state, and metropolitan area

New York refers to a locality in the northeast United States of America. It primarily refers to New York City or New York State. 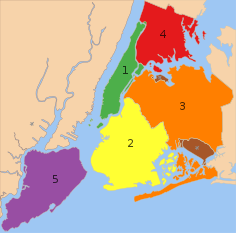 New York City, also known as the City of New York, is a city in the State of New York.

It is divided into five Boroughs: 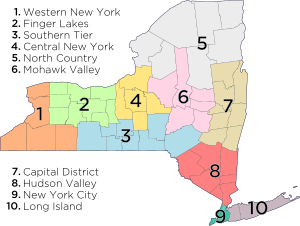 Map of the economic regions in the state of New York

New York State, also known as the State of New York, is a state which contains the City of New York.

Its capital is Albany.

Location of Manhattan, shown in red, in New York City

New York County covers the same area as the New York City borough of Manhattan. New York City was originally in the southern part of this area, and only expanded beyond it in 1898. 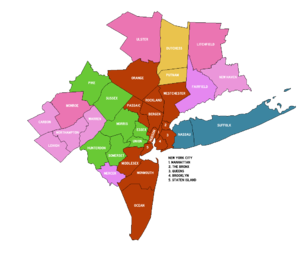 The New York metropolitan area is the region encompassing New York City and its suburbs.

It includes parts of four states:

As per the 2015 United States Census Bureau estimates, the New York metropolitan area remains by a significant margin the most populous in the United States.

A map of the British Province of New York.

The Province of New York (1664–1776) was a British colony preceding the state of New York.

It originally included all of the present states of New York, New Jersey, Delaware, and Vermont, along with inland portions of Connecticut, Massachusetts and Maine, as well as eastern Pennsylvania. The majority of this land was soon reassigned by the Crown, leaving territory that included the valleys of the Hudson and Mohawk Rivers, and Vermont. The territory of western New York was Iroquois land, also disputed between the English colonies and New France, and that of Vermont was disputed with the Province of New Hampshire.

The province resulted from the Dutch Republic surrender of Provincie Nieuw-Nederland to the Kingdom of England in 1664. Immediately after, the province was renamed for James, Duke of York, brother of Charles II of England. The colony was one of the Middle Colonies, and ruled at first directly from England.