Oyenike Laoye-Oturu, professionally known as Nikki Laoye, is a Nigerian recording artist, singer, songwriter, dancer and occasional actress, renowned for her eclectic musical expressions and captivating stage performances.[1] As a recording artist, Laoye's music has earned her several awards including The Headies Award in 2013 for Best Female Vocal Performance[2] and the All African Music Awards (AFRIMA) in 2014 for Best Female Artiste in African Inspirational Music.[3] [4] She is also well known for the 2006 hit song Never felt this Way before, the 2013 dance single "1-2-3", the soulful ballad "Only You", which she remixed in 2016 featuring Seyi Shay and the love song Onyeuwaoma featuring Banky W.[5]

Her passion for humanitarian activities attracted the attention of the Nigerian National Commission for Refugees, Migrants and Internally Displaced Persons (NCFRMI), who unveiled her as the celebrity 'Voice of Refugees' in Southwest Nigeria in 2013.[6] [7]

Her musical style is an urban contemporary sound with the fusion of alternative rock, R&B, hip hop, pop, soul, funk, jazz and Gospel.

Born in Lagos, Nigeria, Laoye hails from the musical lineage of the talking drum legend - Late Oba Adetoyese Laoye (from Ede, Osun State-Nigeria),[8] The singer, fondly called, the small one with the big voice, rose to fame in 2006 with the hit single, "Never Felt This Way Before" from her debut studio album, Angel 4 Life (2008),[9] which also featured other notable singles, including the Hip-Hop collaboration with Rooftop Mcs and her brother, Rap2Sai - "Taka Sufe"; the love ballad "Someone to Love" with R&B crooner Jeremiah Gyang[10] amongst others.

File:Nikki laoye anthem.jpg
Nikki Laoye on the set of the Nigerian National Anthem Video in 2013

Laoye was born in Lagos, Nigeria; the only daughter to Prince Olushola Isaac Laoye & Olori Christiana Yetunde Laoye. Laoye bears traces of a mixed heritage as her father, Olushola is of European (Dutch), Ghanaian and Nigerian ancestry. She is sister to three brothers:[11] Femi, Bola and Ade, who is also known as Xblaze, a budding young music producer/Hip Hop artist[12] in Lagos, Nigeria.

Enrolled in choirs and dance classes at the age of five, Laoye started off her education at Grace Children School,[11] Gbagada, Lagos. Soon enough, she was singled out by her music teacher, who noticed her music abilities at such a tender age and personally offered her free piano lessons at the end of each school day. Laoye's musical talent was further enhanced during her high school years at Federal Government Girl's College, Sagamu[11] (from where she graduated in 1998) and at the University of Ibadan respectively as she performed with the school choirs and joined up with music and dance groups including Exousia, Soul Alliance and the girl group trio, Soul Sistas.[13]

In 1998, Laoye joined the youth band of Ikoyi Baptist Church and was introduced formally to contemporary gospel by friend and music director, Reginald Bassey and served as a soloist/lead vocalist for a couple of years. (Laoye later joined House on the Rock Church and was a lead vocalist for the choirs in Ibadan and Lagos for over 10 years.[14])

In 2000, a chance meeting along the hallways of St. Anne's hall, a private female hostel, at the University of Ibadan brought about the creation of the female girl group, Soul Sistas, composed of Laoye, Debola Kester and Aboyowa Tene.[15] The girls met during an evening of music, fun and games in their dorm room and struck a chord literally. They started performing together, simply for the love of it and finally took up the name "Soul Sistas" after singing at a campus fellowship and the Pastor, Dele Osunmakinde (now Pastor of The Baptizing Church, Lagos) remarked cheerfully "these ladies sing to your soul". In 2003, The girls were joined briefly by another female singer, Funmi Ojo, but returned to a trio within the same year.

Together for five years, Soul Sistas were the only female a cappella group at the University and were renowned for their soulful harmonies including their rendition of the classic a cappella song "Your Love is Better than Life". In 2005,The girls went their separate ways after graduating from the University with Laoye pursuing a solo career and Debola and Aboyowa took up regular jobs. In 2007, the trio returned to record a remix for their hit,[14] "Baba L'oke" for Laoye's debut album, Angel 4 Life. In 2010, Debola contested in the Nigerian music reality show, Project Fame Season 3[16] and was one of the final 10 contestants alongside Ochuko, Yetunde Omo'badan, Chidinma Ekile (winner).

Laoye began her career as a solo artist in 2006, with the release of her first single, "Never Felt this way Before",[13] produced by Nigerian music producer Cobhams. The single enjoyed airplay on mainstream radio stations in Nigeria and gained wide acceptance across the country, thus making Laoye one of the few contemporary Christian artists in the Nigerian music industry with mainstream appeal. The release of her HipHop collaboration single, "Taka Sufe" featuring Rooftop Mcs and Rap2Sai further endeared her to Nigerian youths and provided a platform of expression for her brother, Xblaze who produced the track. (Xblaze Ade Laoye produced most of the songs on Laoye's debut album as well as her 2013 dance single, "1-2-3". He was a principal producer for the West African Edition of X-Factor, held in Lagos, Nigeria). 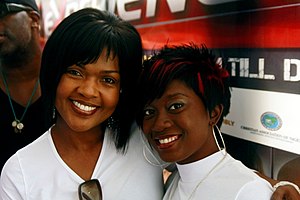 Nikki Laoye with Cece Winans at the Experience 2009 press conference in Lagos, Nigeria

In 2008, Laoye followed up with the release of her debut album Angel 4 Life— a collection of contemporary sounds and a lineup of top Nigerian artists including Rooftop Mcs, Blaise, Jeremiah Gyang and many more. The singer soon gained notoriety as her singles gradually rose to the number one spot on the Nigerian Chart Show for weeks; and she was a main feature on the MTV Base Rockumentary show- Advance Warning. In 2009, Laoye performed[17] alongside American international gospel artists Kirk Franklin, Cece Winans and Donnie McClurkin to an audience of 500,000 at The 2009 Experience Concert in Lagos, Nigeria. Laoye also played a theatrical role in the Nigerian-Broadway stage play musical, OLURONBI in October 2009[18] and was one of the five female artists[19] on the 2009 Tetmosol Girl Power Tour, which was a nationwide tour across various states of Nigeria.

File:Nikki Laoye kirk.png
Laoye and Kirk Franklin performing together at the Experience Concert in December 2009 in Lagos, Nigeria

In 2009, Laoye performed alongside Kirk Franklin, CeCe Winans, Donnie McClurkin to an audience of 500,000[22] at The Experience Concert in Lagos.[23]

Laoye's music has gained critical acclaim beyond Africa, as she was one of the first three Nigerian artists ever to be interviewed and recognized on American entertainment channel, BET in 2009[24] and she was one of the preliminary judges for BET's Sunday Best Auditions which held in Lagos, Nigeria in December 2009. In 2011, Laoye's life and career were showcased in a special feature segment on BET, tagged "BET Spotlight – Nikki Laoye".[23]

Laoye was commissioned to record her own version of the Nigerian National Anthem for Nigerian TV Producer, Mo Abudu's Ebony Life Television in June 2013. The video is renowned as the first official music video for the Nigerian Anthem. Since its release in June 2013, Laoye has been invited to perform the anthem for the Presidency[27] in Aso Rock, Abuja and at other official functions. As at 2013, she released the singles "No Be Beans" with Yoruba Hip Hop artist Base One; the dance single "1-2-3"; and the Rotimi Keys produced[28] ballad "Only You", a song dedicated to the memory of her late father,[25] for which she won an award for the Best Vocal Performance (Female) at the 2013 Headies Awards in Lagos, Nigeria.[29]

Laoye also lends her vocal signature on radio jingles some of which include Etisalat's "0809aija 4 Life", which featured R&B singer Banky W, MTN's "Everywhere You Go" jingle and Fidelity Bank's "No Greater Feeling". The singer has performed film soundtracks for major Nollywood productions such as Bent Arrows,[30] Where the Heart Lies,[31] Mission 2 Nowhere[31] and the ensemble film Journey to Self[32]

Laoye is also an on-air personality on television and radio. In 2005 she hosted the TV Show New Breeze Show on Silverbird Entertainment Television and as of 2013, she hosts her own radio show, Girls Rock with Nikki Laoye[33] on Nigerian internet gospel radio station Praiseworld Radio. She was also unveiled as one of the hosts for a gospel reality TV competition, Stars 4 Christ.[34]

In August 2013, Laoye headlined the Nigerian Corner at the Nottinghill Carnival[35] in the United Kingdom, an event which attracts thousands of Nigerians living across the United Kingdom. In the same year, Laoye went on a church tour of England,[36] which took her to London, Manchester, Loughton and Warrington. In September 2013, Laoye performed alongside R&B legend Mary J. Blige[37] at the "Sisters with Soul" concert in Lagos, Nigeria.

Laoye headlined the 2014 Headies Awards as well as the 10th Anniversary of the Rhythm Unplugged Concert[38] in December 2014.

In December 2010, Laoye founded the "Angel 4 Life Foundation",[42] a non-governmental organization through which she mentors and helps develop the creative skills of talented physically challenged youths[43] and also assists in the management of the Music Therapy Clinic of Modupe Cole Home for the Physically and Mentally Challenged, in Lagos, Nigeria.[8]

In October 2012, Laoye's Angel 4 Life foundation, in conjunction with the Nigeria Association of the Blind (Lagos Chapter, Nigeria) celebrated the 2012 International White Cane Day, the event consisted of a Sing for the blind unplugged fund raising gig on the hallways of The Palms Shopping Mall in Lekki with support from celebrities such as Sammie Okposo, Funke Kuti, Tiwa Savage, Dipp, Lamboginny and Kiki Omeili; a White Cane Awareness Walk and a Lunch Reception to celebrate the achievements and independence of all visually impaired citizens of Lagos State.[44]

In 2013, Laoye was given an honorary 234Giver Award[14] for her advocacy and contribution to the social and educational development of the physically challenged in Nigeria. The award was presented by 234Give, Nigeria's first online fundraising platform - a company dedicated to empowering individuals and companies to raise funds for causes that improve and uplift their communities.

On 26 December 2013, Laoye was unveiled as the winner of the category of the Best Vocal Performance (Female) for her soulful ballad "Only You" in a strong field that included singers Waje, Niyola, Seyi Shay and Zaina, at The Headies 2013 Award ceremony in Lagos, Nigeria.[29]

In April 2014, Laoye was unveiled as 'The Voice for Refugees'[47] in southwest Nigeria, by the National Commission for Refugees, Migrants and Internally Displaced Persons (NCFRMI). As part of her role as a celebrity voice, she has appeared at various events organized by the Commission to enlighten the general public about the travails of refugees and internally displaced persons. She has also made donations to the cause and performed at a number of events in support of the cause.

On 19 August 2015, Laoye was given the Humanitarian of the Year Award by the World Hope Foundation in honor of her humanitarian activities and in commemoration of the 2015 World Humanitarian Day.[54]