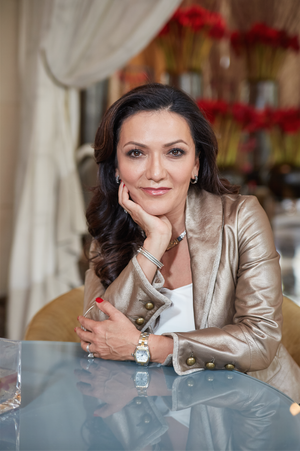 Nina Vaca is the founder of Pinnacle Group, and she currently serves as a director for various publicly traded companies including Kohl's, Cinemark Holdings, and Comerica, Inc. She has devoted much of her success back into philanthropic efforts, helping other women and minorities find their way in the business world.

Vaca was born in Quito, Ecuador, but her parents immigrated to the United States when Vaca was young. Growing up in Los Angeles, she was inspired by her parents' quest for the American dream. Her parents had four other children, and they opened a family business in order to make ends meet. Through hard work and dedication, the family business started to flourish, and Vaca had a particularly active role. By the time Vaca finished high school, she was already the primary decision-maker at the business. With these early work experiences, Vaca learned the value of a good work ethic and an entrepreneurial spirit.

After high school, Vaca pursued her education at Texas State University. She took a diverse range of coursework, completing a Bachelor of Arts in Speech and Communication. She also earned a minor in Business Administration and was later honored by the school as a Distinguished Alumna. To continue her education, she completed an executive program at Harvard Business School. Eventually, Vaca went on to earn other honorary degrees. She holds an Honorary Doctorate from Northwood University and an Honorary Doctor of Laws from Mount Mary University. Berkeley College also bestowed a degree of Honorary Doctor of Commercial Science for Vaca's excellent performance.

Vaca used her entrepreneurial skills early on by moving to New York and starting her own business. With growing success, she managed to rapidly expand her experience. Within time, Vaca has become one of the leading business minds in America.

Vaca's first major venture started at the age of 25. At this time, she founded Pinnacle while living in Dallas, Texas. The business quickly gained traction, but the operations were badly impacted by the events of September 11. With the ensuing economic downturn, Vaca saw her business holdings diminish. Her once-thriving business now only had one remaining client and four associates.

However, before liquidating the company, Vaca bought out her partner and took full control of the company. From this low state, Vaca managed to revitalize Pinnacle. Within a year, Vaca had won forty new contracts. Pinnacle's success only continued to build from there. Vaca orchestrated the purchase of a Silicon Valley software company to diversify Pinnacle's presence in the technology sector.

With success through Pinnacle, Vaca extended her influence to other companies. Using her success, Vaca was able to join the boards of three publicly traded companies. These three companies have a combined market cap of $32 billion. Vaca still holds her place as director on the boards of Kohl's Corporation, Cinemark Holdings and Comerica, Inc.

Understanding her own humble roots, Vaca has always been committed to giving back to the community. To this end, Vaca is a noted civic leader, and her philanthropic efforts have had a profound impact on the lives of others. In particular, Vaca feels drawn toward causes that empower women and minorities. Through Pinnacle, Vaca has founded numerous charitable efforts.

For example, Pinnacle is an industry partner for Pathways to Technology Early College High School. This program is offered through the Dallas Independent School District, and it serves a Dallas school with a large Hispanic population, giving students expanded educational opportunities. Students who complete the program graduate with both a high school diploma and an Associate's Degree. Many of these students are the first in their families to attend college.

Vaca has also founded At the Table: Women in Business and Leadership as a support system for women climbing the corporate ladder to the board room. She was also selected to be one of the first Presidential Ambassadors for Global Entrepreneurship, which allowed her to travel around the world and inspire the next generation of business leaders. In her philanthropic work, Vaca has traveled to countries like Jordan to reach out to others.

Vaca is married to Jim Humrichouse. Despite her entrepreneurial nature, she has always put family first. Vaca started her family at a young age and balanced her work with her family as she built Pinnacle from the ground up. Vaca and her husband have four children together. In her free time, Vaca likes to compete in triathlons and spend time with her family.

Retrieved from "https://en.everybodywiki.com/index.php?title=Nina_Vaca&oldid=567297"
This page was last edited on 12 November 2019, at 18:36.
This page has been accessed 649 times.
Content is available under License CC BY-SA 3.0 unless otherwise noted.
Privacy policy
About EverybodyWiki Bios & Wiki
Disclaimers