Ninjasport,[1] the sport of Ninja Warrior,[2], ninja warrior sport,[3] also called ninja competitions,[4] or ninjathletics,[5] is an obstacle course racing sport, a variant with rock climbing, parkour and gymnastics contributions. It is a spin-off of Japanese obstacle course TV game show "Sasuke" aka "Ninja Warrior". The flagship events are the various unlicensed copies of and officially franchised Ninja Warrior TV shows.[2] Athletes who compete in ninja warrior competitions[6] refer to themselves as ninjas,[4] though also sometimes call themselves "ninja warriors",[7] "ninja athletes",[8] or "ninjathletes".[9]

Ninjasport is in the category of functional fitness sports, along with CrossFit, and parkour, which are less style conscious that many other sports, but more focused on acquiring skills and abilities. Its naming has been criticized for exploiting Japanese culture, and lack of connection to the ninja, as the bellicose flamboyant competitions in ninjasport are a far cry from the stealthiness expected of ninjas who used stealth for assassination.[15] It has also been noted for its leveling the field, in allowing competitors from all walks of life to compete directly against each other, whether they are international calibre athletes or stay-at-home parents; and inspiring similar to start competing and getting fit. Kareem Abdul Jabbar observes that it fits the American mindset and culture with its individualistic and democratic participation.[16] 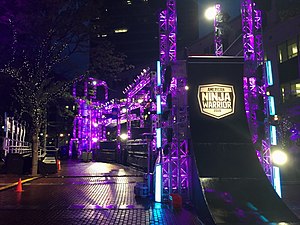 A warped wall on an American Ninja Warrior course

Ninjasport feature prominently agility and upper body strength obstacles.[17] Among the favorite obstacles in ninja warrior, are the warped wall and the salmon ladder.[18] However, more and more obstacles are being created all the time by those running competitions. Creativity of obstacles are one of the things that keep the sport unique and interesting and push the athletes to get better.

World Obstacle[19] has become the officially recognized body by the Global Association of International Sports Federations(GAISF) in observer status as a key step to bring obstacle course racing through the process of getting the sport into the Olympics.[20] Ninjasport to obstacle course racing is considered analogous to the short sprints & hurdles in the world of track & field.

Outside of the TV show, events and facilities exist.[2][4][21] Several national association of ninja gyms have been established with the express goal of confirming ninja warrior as an established sport.[18]

In the United States, the two most established leagues are the. Ultimate Ninja Athlete Association[22] and the National Ninja League[23]. Regional and local competitions also exist around the USA. Training facilities ("ninja" gyms) also exist across the country.[2][4] Gyms started to appear around 2014, and many stars of American Ninja Warrior have opened their own gyms. There are now a variety of youth that are growing up with this as their sport, and it is common to see teenagers competing with 20+ and 30+ year olds and often winning. The Ninja Sport Network and Ninja Sport Championship were announced in 2021 by Ethan Swanson and Chris DiGangi - two veterans of the American Ninja Warrior show and the sport - to provide high quality coverage of ninja sporting events and make it available to viewers everywhere.[24]

In Australia, the sport has risen rapidly, driven by its TV counterpart, Australian Ninja Warrior, and similarity in rapid popularity of its 1990s TV sport predecessor Australian Gladiators.[15]

Share
Retrieved from "https://en.everybodywiki.com/index.php?title=Ninja_Warrior_(sport)&oldid=2162307"
Categories:
Hidden categories:
This page was last edited on 24 November 2021, at 17:30.
This page has been accessed 1,091 times.
Content is available under License CC BY-SA 3.0 unless otherwise noted.
Privacy policy
About EverybodyWiki Bios & Wiki
Disclaimers
Dark mode