The November 2014 North American cold wave was an extreme weather event that occurred across most of Canada and the contiguous United States, including parts of the Western United States up to western California. One of the first events of the winter, the cold wave was caused by the northward movement of an extremely powerful bomb cyclone associated with Typhoon Nuri's remnant, which shifted the jet stream far northward, creating an omega block pattern. This allowed a piece of the polar vortex to advance southward into the Central and Eastern United States, bringing record-cold temperatures to much of the region.[6][7][8] In contrast, Alaska experienced above-average temperatures.

This was the worst cold wave that the North American region had experienced since an earlier cold wave in early 2014. The cold wave was expected to last for a few weeks, extending at least until American Thanksgiving.[9] Although the Omega Block broke down on November 20, due to a powerful storm moving into the Gulf of Alaska, frigid conditions continued to persist across much of the United States. There was also concern among some meteorologists that another cold wave or abnormally cold trend might persist throughout the winter of 2014–15, the chances of which were "above average."[10] On November 23, a warming trend primarily in the Eastern United States brought an end to the cold wave;[1] however, below-average temperatures were forecast to return to the Midwest by November 24. Despite the development of a second cold wave, it ended on December 6, when a ridge of high pressure brought above-average temperatures to the region, especially in the Central United States. 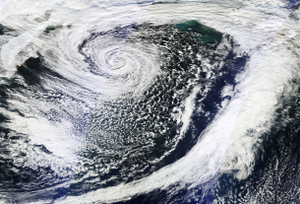 The 2014 Bering Sea bomb cyclone at peak intensity on November 8, over the Bering Sea. This system triggered the cold wave across North America.

On November 8, the northward movement of a bomb cyclone associated with Typhoon Nuri's remnants shifted the jet stream far to the north, creating an omega block pattern, which allowed a fragment of the polar vortex to descend from Arctic region into lower Canada and the Eastern United States, affecting up to 200 million people with colder-than-normal temperatures and early snowstorms. Although the Omega block broke down on November 20, a powerful storm brought more frigid temperatures. The wave ended on December 6 when an area of high pressure moved in.[11]

Some meteorologists also predicted that the winter of 2014–15 would be abnormally cold across the Eastern United States (though on October 16 the NOAA predicted warmer than average Winter temperatures in the Northeast[12]), due to early snowfall in Siberia, and a weak but developing El Niño, which are both factors in erratic jet stream behavior that could lead to an abnormally cold winter.[10]

The cold wave brought an end to the navigation season on the upper Mississippi River, the earliest closing since records began in 1969.[17]

A severe and persistent lake-effect snow event hit the Great Lakes snowbelt regions, triggered by a winter storm that emerged from Canada, to the north of the Midwest.

In Buffalo, New York, another winter storm triggered a strong lake-effect band, which impacted the city and its immediate southern suburbs from November 17–19, 2014, with a second wave hitting November 20 before shifting southward and weakening.[19] As much as 65 inches fell in Cheektowaga. Snow fell at rates as high as five inches per hour.[20] However, nearby regions of Buffalo only received between one and six inches from the storm.[21] Once the band dissipated, the risk of flooding became a significant concern, as temperatures were forecast to rise sharply and rain was forecast to enter the area beginning November 23, causing the snowpack to melt rapidly.[22]

Snow depths of greater than 24 inches where reported in numerous location across the Upper Peninsula of Michigan.[24] with 42.5 inches reported near Ishpeming between November 10–12.[25] Gaylord and Sault Ste. Marie, Michigan had each reported over 50 inches of snow in November.[26] Allendale in west Michigan received 20.4 inches with 17 inches in East Grand Rapids.[27]

Canada was also affected by the cold, but due to frequent cold waves in the winter, very little records were broken and effects were negligible.[citation needed]

Because of weather-related difficulties in the Buffalo area, many sporting events were postponed, canceled, or moved.

President Obama stated that himself and his family fled the country to Australia to get away from the cold and settled down in an apartment in Brisbane, Australia until the snow cleared up in the U.S.

Others articles of the Topic Weather : Tropical Depression Ten (2005)