A "Pig" launcher/receiver, on the natural gas pipeline in Switzerland

It is uncertain when the first crude oil pipeline was built.[1] Credit for the development of pipeline transport is disputed,[citation needed] with competing claims for Vladimir Shukhov and the Branobel company in the late 19th century, and the Oil Transport Association, which first constructed a 2-inch (51 mm) wrought iron pipeline over a 6-mile (9.7 km) track from an oil field in Pennsylvania to a railroad station in Oil Creek, in the 1860s.

Pipelines are generally the most economical way to transport large quantities of oil, refined oil products or natural gas over land. For example, in 2014, pipeline transport of crude oil cost about $5 per barrel, while rail transport cost about $10 to $15 per barrel.[2] Trucking has even higher costs due to the additional labor required; employment on completed pipelines represents only "1% of that of the trucking industry.".[3]

Natural gas (and similar gaseous fuels) are lightly pressurized into liquids known as Natural Gas Liquids (NGLs). Small NGL processing facilities can be located in oil fields so the butane and propane liquid under light pressure of 125 pounds per square inch (860 kPa), can be shipped by rail, truck or pipeline. Propane can be used as a fuel in oil fields to heat various facilities used by the oil drillers or equipment and trucks used in the oil patch. EG: Propane will convert from a gas to a liquid under light pressure, 100 psi, give or take depending on temperature, and is pumped into cars and trucks at less than 125 psi (860 kPa) at retail stations. Pipelines and rail cars use about double that pressure to pump at 250 psi (1,700 kPa). 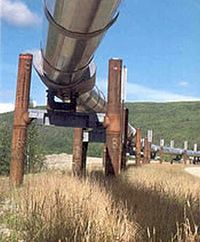 An elevated section of the Alaska Pipeline.

The distance to ship propane to markets is much shorter, as thousands of natural-gas processing plants are located in or near oil fields. Many Bakken Basin oil companies in North Dakota, Montana, Manitoba and Saskatchewan gas fields separate the NGLs in the field, allowing the drillers to sell propane directly to small wholesalers, eliminating the large refinery control of product and prices for propane or butane.

The most recent major pipeline to start operating in North America, is a TransCanada natural gas line going north across the Niagara region bridges with Marcellus shale gas from Pennsylvania and others tied in methane or natural gas sources, into the Canadian province of Ontario as of the fall of 2012, supplying 16 percent of all the natural gas used in Ontario.

This new US-supplied natural gas displaces the natural gas formerly shipped to Ontario from western Canada in Alberta and Manitoba, thus dropping the government regulated pipeline shipping charges because of the significantly shorter distance from gas source to consumer. To avoid delays and US government regulation, many small, medium and large oil producers in North Dakota have decided to run an oil pipeline north to Canada to meet up with a Canadian oil pipeline shipping oil from west to east. This allows the Bakken Basin and Three Forks oil producers to get higher negotiated prices for their oil because they will not be restricted to just one wholesale market in the US. The distance from the biggest oil patch in North Dakota, in Williston, North Dakota, is only about 85 miles or 137 kilometers to the Canada–US border and Manitoba. Mutual funds and joint ventures are big investors in new oil and gas pipelines. In the fall of 2012, the US began exporting propane to Europe, known as LPG, as wholesale prices there are much higher than in North America. Additionally, a pipeline is currently being constructed from North Dakota to Illinois, commonly known as the Dakota Access Pipeline.

As more North American pipelines are built, even more exports of LNG, propane, butane, and other natural gas products occur on all three US coasts. To give insight, North Dakota Bakken region's oil production has grown by 600% from 2007 to 2015.[4] North Dakota oil companies are shipping huge amounts of oil by tanker rail car as they can direct the oil to the market that gives the best price, and rail cars can be used to avoid a congested oil pipeline to get the oil to a different pipeline in order to get the oil to market faster or to a different less busy oil refinery. However, pipelines provide a cheaper means to transport by volume.

Enbridge in Canada is applying to reverse an oil pipeline going from east-to-west (Line 9) and expanding it and using it to ship western Canadian bitumen oil eastward.[5] From a presently rated 250,000 barrels equivalent per day pipeline, it will be expanded to between one million to 1.3 million barrels per day. It will bring western oil to refineries in Ontario, Michigan, Ohio, Pennsylvania, Quebec and New York by early 2014. New Brunswick will also refine some of this western Canadian crude and export some crude and refined oil to Europe from its deep water oil ULCC loading port.

Although pipelines can be built under the sea, that process is economically and technically demanding, so the majority of oil at sea is transported by tanker ships. Similarly, it is often more economically feasible to transport natural gas in the form of LNG, however the break-even point between LNG and pipelines would depend on the volume of natural gas and the distance it travels.[6]

The Enbridge Sandpiper pipeline is proposed to transfer valuable oil from Western North Dakota through northwestern Minnesota. The pipeline will be 24–30 inches in diameter. It will carry over 300,000 barrels of oil a day with a volatility of 32.[7]

Gas pipe in the dry region of Antofagasta, Chile.

The market size for oil and gas pipeline construction experienced tremendous growth prior to the economic downturn in 2008. After faltering in 2009, demand for pipeline expansion and updating increased the following year as energy production grew.[8] By 2012, almost 32,000 miles of North American pipeline were being planned or under construction.[9] When pipelines are constrained, additional pipeline product transportation options may include the use of drag reducing agents, or by transporting product via truck or rail.

Oil pipelines are made from steel or plastic tubes with inner diameter typically from 4 to 48 inches (100 to 1,220 mm). Most pipelines are typically buried at a depth of about 3 to 6 feet (0.91 to 1.83 m). To protect pipes from impact, abrasion, and corrosion, a variety of methods are used. These can include wood lagging (wood slats), concrete coating, rockshield, high-density polyethylene, imported sand padding, and padding machines.[10]

Crude oil contains varying amounts of paraffin wax and in colder climates wax buildup may occur within a pipeline. Often these pipelines are inspected and cleaned using pigging, the practice of using devices known as "pigs" to perform various maintenance operations on a pipeline. The devices are also known as "scrapers" or "Go-devils". "Smart pigs" (also known as "intelligent" or "intelligence" pigs) are used to detect anomalies in the pipe such as dents, metal loss caused by corrosion, cracking or other mechanical damage.[11] These devices are launched from pig-launcher stations and travel through the pipeline to be received at any other station down-stream, either cleaning wax deposits and material that may have accumulated inside the line or inspecting and recording the condition of the line.

For natural gas, pipelines are constructed of carbon steel and vary in size from 2 to 60 inches (51 to 1,524 mm) in diameter, depending on the type of pipeline. The gas is pressurized by compressor stations and is odorless unless mixed with a mercaptan odorant where required by a regulating authority.

Retrieved from "https://en.everybodywiki.com/index.php?title=Oil_pipeline&oldid=1222678"
Hidden categories:
This page was last edited on 8 January 2021, at 14:35.
This page has been accessed 23 times.
Content is available under License CC BY-SA 3.0 unless otherwise noted.
Privacy policy
About EverybodyWiki Bios & Wiki
Disclaimers
Mobile view