The current site of UBC Okanagan was originally used by Okanagan University College, which had been founded in 1989 (in principle) as a part of a plan by the government to improve access to post-secondary education in the Southern Interior British Columbia. Originally degrees were awarded in partnership with other universities, but by 1995, the university college began granting degrees in its own name. In the late 1990s, Okanagan University College began lobbying efforts to gain full university status.

In March 2004, BC Premier Gordon Campbell and the UBC President Martha Piper held a press conference, announcing that OUC would be dissolved. Okanagan University College’s university operations would be consolidated at its North Kelowna Campus and would come under the control of the University of British Columbia. The other programs and campuses of Okanagan University College would form a new community college, which would later take on the name Okanagan College. The OUC Board was reportedly not invited to the press conference and had not been told in advance of the imminent demise of OUC Board and removal or the termination or the majority of the OUC board members.[3]

According to the Ministry backgrounder released at the time, the affiliation between UBC Vancouver and UBC Okanagan would be “based on the highly successful University of California model” and that “UBC Okanagan and UBC Vancouver will each have an independent senate to set academic priorities for their respective institutions, based regional needs and priorities. At the same time, they will share a common board of governors, with strong representation from each region.” [4]

As of December 2014, UBC's Okanagan campus is represented on the UBC Board of Governors by Jeffrey Krupa, Dr. Michael Treschow, and Shannon Dunn.[5]

Since the establishment of UBC Okanagan, the campus has gone through rapid growth and is continuing the trend as one of Canada's fastest growing university campus. The number of students increased 3 fold from ~3,000 to close to ~9,000 in 2017. The university is playing a leading role in the region's research and development, a 30-acre Innovation Precinct is being developed become a hub for innovation.

The smaller size of the university offers a unique learning and research environment. Undergraduate students in Science and Engineering have more opportunities to pursue research activities early-on thanks to various research programs such as the Work-Study program and the Undergraduate Research Award (URA).

Since established in 2005, the research capability and researcher profiles has increased rapidly. Tri council funding increased from $1.1M/year to $5.9M/year from 2005-2015. The total research funding reached $14.7M/year with 714 projects in 2015. Research at UBC Okanagan is highly collaborative with an emphasis on direct student involvement to advance discoveries in fields of importance globally and locally. The Survive and Thrive Applied Research (STAR) initiative exemplifies this spirit of innovation with cutting-edge projects, including control software for unmanned aerial vehicles. STAR creates a bridge between UBC Okanagan and industry, specializing in technologies for human protection and performance in extreme, remote, or rural conditions. There are currently 15 research centres and 505 faculty members on the Okanagan campus [9]. 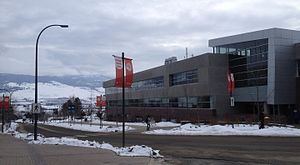 Arts and Sciences building and Engineering and management building were completed in 2011 as well. The most recently completed building is the medical school building which was completed by end of the year 2011. The second Arts and Science building includes a new live animal testing facility. In addition, there are various student residences in various stages of construction. All construction was originally set to be complete by September 2010, later projected to be completed about a year and a half past that date.

In 2012, the Health Science Centre was opened providing 47,000 sq. ft. of academic and research space for high-tech classrooms, research and teaching laboratories, problem-based learning rooms and faculty and administrative offices.

Along with the physical expansion of the campus, the campus' Collegia program has gained national attention as a home-away-from-home for its large commuter population.[10]

According to the UBC Okanagan Campus Plan in Sept. 2015,[11] the next 20 years will see drastic expansion in research, teaching, student residence, and commercial spaces. A proposed 85,292-square metre increase in academic space will more than double the current capacity. Student residence is proposed to increase by ~2,200 beds to a total of ~3,900 beds. Commercial space will increase from current 2,411 square metres to 4,561 square metres. The additional space will remain within the main Okanagan campus, rather than expanding into the West Campus.

In 2016, the building of a new $40 million Teaching and Learning Centre is underway that expands on the current UBC Okanagan Library. [1] Sustainability upgrades to 11 of the existing buildings are also underway. The public consultation to redesign the current University Way is planned for January 2017. The revitalization of the University Way project will make it a pedestrian only area and is expected to facilitate greater student interactions, festivals and interactions.

The university maintains a "Campus Life" centre and other offices.

A view looking down through the residences.

The Phoenix (website), is the bi-weekly student newspaper at the University of British Columbia's Okanagan campus. It was established in 1989 at former Okanagan College.[15]

The UBCO.TV creates videos about research, teaching, current events and campus life at the Okanagan campus. Videos are available on the UBCO.TV website.

Main article: Faculties and Schools of the University of British Columbia

Retrieved from "https://en.everybodywiki.com/index.php?title=Okanagan_Campus,_University_of_British_Columbia&oldid=940166"
Categories:
Hidden categories:
This page was last edited on 10 August 2020, at 09:27.
This page has been accessed 535 times.
Content is available under License CC BY-SA 3.0 unless otherwise noted.
Privacy policy
About EverybodyWiki Bios & Wiki
Disclaimers