Old Town Spring is an old town with over 150 shops, restaurants, and art galleries in Spring, a community in unincorporated Harris County, Texas.

Old Town Spring is north of the city of Houston and outside Beltway 8. Many of the original buildings, some over a hundred years old, now house places to buy antiques, collectibles, clothing, and gifts. 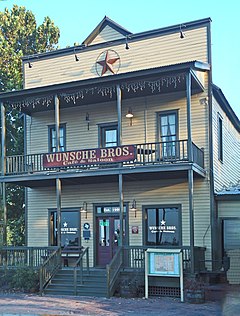 Wunsche Bros. Saloon was the first two-story building erected in Old Town Spring. It is still standing today, although not currently open for business after a fire.

The population in the Old Town Spring area started growing in the early 19th century when the Spanish and French came to trade with the local Akokisa (Orcoquisac) Indians. The small town grew consistently until the early 20th century. At one time the town had as many as five saloons and a gambling hall. The town thrived on the booming railroad business in South Texas and resulting industrialization.[citation needed]

After the Depression, Prohibition, and a relocation of the railroad headquarters, the small town slowly declined in population until Houston's Oil boom in the 1970s and 1980s brought merchants back to the area to make the town what it is today.

This town is rumored to be known for being a robbery victim of Bonnie and Clyde. Though the bank building still has bullet holes from several robberies in the 1920s and 1930s.[citation needed]