The vast majority of computer owners are only users, and only a fraction develop software themselves. programming has the image that it is difficult. One of the many initiatives to remove that image is PWCT, which stands for Programming Without Coding Technology. Although visual programming environments are generally limited in their capabilities and mainly aim to show the user the concepts of programming, you can make almost anything with PWCT. Of course, that doesn't happen after a few minutes. [5][6][7] Also PWCT could be used in introducing programming concepts. The project started in Dec. 2005 and support designing applications through visual programming then generating the source code, the software support code generation in many programming languages.[8][9][10][11] 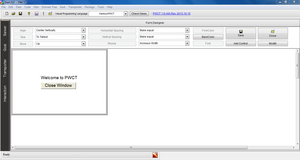 The visual source inside PWCT is designed using the Goal Designer where the programmer can generate the steps tree through the interaction with the visual language components.

Inside PWCT, the visual source is a collection of goals, each goal contains tree of steps and each step/node inside the steps tree may contains one or more of data entry forms. Steps tree uses colors that tell the programmer about the step type. Some steps allow containing sub steps, other steps don’t allow this, also some steps is not more than comments for the programmer. The steps tree gives the programmer two dimensions where the relationship between the node and another node could be “next to” or “contains” where the programmer can go depth-first or breadth-first when he/she interacts with the steps tree.

The programmer can use the dimension "contains" to do an operation on a group of steps/nodes at the same time (move up / move down / cut/ copy / delete).

The programmer can use the form designer to design the user interface.

Inside the Goal Designer, the user can use the mouse or the keyboard to select the visual components and generate new steps in the steps tree. Using the mouse we can explore the environment to see the components that are ready for use. Using the Keyboard by typing the component name, the programmer can quickly get any component and start using it.

Others articles of the Topics Free and open-source software AND Computer programming : Koseven (framework), AdoptOpenJDK, GrapheneOS