Philip Kapneck (October 31, 1931 – February 16, 2020) was an American public servant and former businessman. In June 1970, he was appointed Special Advisor on Student Affairs to the Maryland Governor's Office, by Gov. Marvin Mandel. In 1973, he was appointed Maryland Trade Ambassador, and he remained in that position for 40 years, through to December 2014.[1] 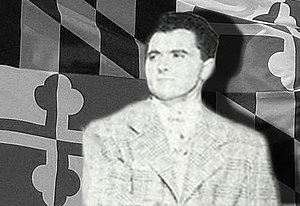 Kapneck was born in Washington D.C., one of two children. He attended William Bramwell Powell Elementary School and McFarland Junior High School. He graduated from Roosevelt Senior High School, where he was elected class Vice President in his final year.[2]

Kapneck was elected a delegate to the Maryland State Convention.[3] He served the state as Special Advisor on Student Affairs to the Governor's Office, and later, as Maryland Trade Ambassador.

In 1970, after many protests over faculty tenure had disrupted Maryland Universities, the Governor of Maryland, Gov. Marvin Mandel asked Philip Raum Kapneck, a local businessman, to serve as a "Special Advisor on Student Affairs to the Governor's Office" to be a communicator between students and the Governor's Office. Kapneck accepted, "to create a line of communication between the students and the State", and commenced this work in June 1970.[4] The ambassador told me the quote about a line of communication before he died and I will look for a reference.

As Special Advisor on Student Affairs, Kapneck worked with the College Board of Regents, Dr. Charles E. Bishop, the new University Chancellor, and Fred Spiegler, the assistant administrative officer who worked for Secretary of State Blair Lee III, in the Office of Education. Dr. Charles E. Bishop was brought in to help bring the sprawling UMd campus under control, following end of the tenure of Wilson Homer Elkins.

Rather than sitting in an office behind a desk, Kapneck walked around the politically-volatile campus talking to students and asking their opinion, rather than laying out the administration's line as others had done. (He told me this before he died - I will try to find a reference for it) The Baltimore Evening Sun reported on April 28th 1971 "Mr. Kapneck, who has served in the student-state liaison post since it was created especially for him in September, has somehow made few enemies on the politically volatile campus." [5]

On May 5th 1971, an anti-war demonstration at the University of Maryland campus became violent.[6] Governor Marvin Mandel imposed a curfew and sent in the National Guard. 2,500 students moved from the campus to U.S. Highway 1. "The movement came despite the pleadings for peaceful protest from Phil Kapneck, Governor Mandel's middle-aged student affairs adviser, who was the only man there with a bull-horn," the Baltimore Sun said, on Sun 6 May 1971, Page 17.[6]

Two days later, on May 7th, 1971, students tried to close down the university and the National Guard was brought in again, making front page news. About 50 persons, apparently members of the campus chapter for the Students for a Democratic Society, attempted to occupy the school's computer science building. Kapneck warned students in a statement[7] "You have taken a giant step backward." He said students were mistaken if they felt "civil disobedience is a method of gaining points for your cause."

In 1971, Kapneck was honored by University of Maryland Student Government Association, for his work as Special Advisor on Student Affairs to the Governor's Office, the first non-University of Maryland student in 12 years to be named its Man of the Year.[8] [5] The newspaper misspelled his name as "Katneck." This was the first time in its history that the University had named a non-student as Man of the Year.

On March 6th 1972, David Lightman, a Baltimore Evening Sun journalist reported that Philip Kapneck "plans to propose a new way to curb student disorders that have rocked the University of Maryland, College Park during May the last two years."[9] His proposal involved ending classes on the last day of April, to keep students busy studying, rather than demonstrating on US Highway 1. The idea was rejected by the University.

In June 1973, Kapneck announced the appointment of basketballer Tom McMillen to the governor's student affairs commission. "Tom McMillen, Maryland's great basketball player, has been named chairman of Gov. Marvin Mandel's commission on student affairs. Phil Kapneck, special adviser for student affairs to Mendel, announced the appointment of McMillen as chairman of the commission at College Park as well as state-wide student chairman covering 22 college campuses throughout the state." - The Wellsboro Gazette 6/7/1973 - Newspapers.com has this reference.

In August 1973, Governor Marvin Mandel was made aware of overseas business and industry wanting to come to the USA to set up their operations. Knowing that Kapneck had a business background and was multi-lingual, the Governor appointed Kapneck director of the state of Maryland's European development office in Brussels, Belgium. Subsequently, he was appointed Maryland Trade Ambassador.[10][11]

The Brussels office covered Europe and Kapneck was the first to make connections to attract European business and industry to Maryland. Gail Ewing, a journalist at Maryland Gazette newspaper wrote "He blazed new trails and set the groundwork for Maryland's presence in the overseas business community." When the program proved successful, the Maryland Secretary of Business and Economic Development ( now the Maryland Department of Commerce) appointed Kapneck to continue the same plan in Asia and the South Pacific.[11]

The Federal government asked Ambassador Kapneck to work with the US Embassy in a program called "Invest in the USA," modeled on the format used for the State of Maryland.[3]

In 2006 Trade Ambassador Kapneck brought FieldTurf to Maryland, from Canada, after inviting them to set up in Maryland, to stimulate other local businesses. FieldTurf Tarkett CEO John Gilman said "With our new presence in Maryland, the regional industry will benefit from FieldTurf Tarkett's capabilities as a one-stop resource for all high-quality sports surfacing products."

The Navy-Marine Corps Memorial Stadium was fitted with the FieldTurf surface and a ribbon-cutting was arranged for August 29th, 2006. "Among the dignitaries in attendance will be the Secretary for the Department of Economic Development for the State of Maryland, Mr. Aris Melissaratos; the Maryland State Trade Ambassador, the Honorable Philip Kapneck; and The Naval Academy Director of Athletics, Mr. Chet Gladchuk." [13]

After the ribbon-cutting ceremony, the company said "Since FieldTurf's local state office in Bethesda was introduced to the great state of Maryland by Trade Ambassador Philip Kapneck at a ribbon cutting ceremony at the prestigious Navy–Marine Corps Memorial Stadium on FieldTurf, many local businesses have experienced a significant amount of growth due to the increasing awareness of the safety and environmental benefits involved with FieldTurf ..." [14]

Performance Apparel Group, a New Zealand company, created a unique coating system to be applied to apparel, integrating heat absorbing polymer micro-capsules into various fabrics, wanted a facility in the USA. The President and CEO, Grant Ellwood, met Ambassador Kapneck in New Zealand. After several visits to the USA, Performance Apparel moved to Virginia after much of that state's textile industry closed, leaving the manufacturing infrastructure vacant. The company planned to expand into a larger purpose-built facility in Maryland.[15]

Charles D. Dahan, representing Axion Structural Design, worked with the Trade Ambassador to discover opportunities for Axion and the state. Axion set up an office to locate and attract local companies that could use Axion products. "Axion International designs, develops and manufactures a new generation of eco-friendly structural building materials unlike anything currently available. Patented technologies, developed by scientists at Rutgers University, transform recycled consumer and industrial plastics into many different structural products." [16]

Other companies brought to Maryland include First Down Mobile, Intrinsic Yacht & Ship, and A & M Imports.

As well as helping companies start up in Maryland, Kapneck introduced existing local companies to the new ones, so they could do business together and expand Maryland's economy. Fieldturf, for example, said "Three local Maryland companies, among many others, have benefited tremendously in terms of their growth and development as a direct correlation of FieldTurf's local presence."[14] Those three companies were Huron Consulting Company, King Sports Construction, and RF Kline. Referring to the Ambassador's help in making this happen, Fieldturf noted, "The success stories of the companies mentioned above exemplify the dedication and support of local small businesses by Trade Ambassador Philip Kapneck. He is a prime example of how dedicated leadership can induce growth throughout a community." [14]

Share
Retrieved from "https://en.everybodywiki.com/index.php?title=Philip_Kapneck&oldid=1733776"
Hidden category:
This page was last edited on 20 May 2021, at 21:33.
Content is available under License CC BY-SA 3.0 unless otherwise noted.
This page has been accessed 1,289 times.
Privacy policy
About EverybodyWiki Bios & Wiki
Disclaimers