During the German occupation of Poland in World War II, some Poles collaborated with the country's German Nazi occupiers.

Historians John Connelly and Leszek Gondek described Polish collaboration as having been “marginal",[1] and Connelly wrote that "only a relatively small percentage of the Polish population engaged in activities that may be described as collaboration, when seen against the backdrop of European and world history".[2] Klaus-Peter Friedrich, citing Richard C. Lukas and Czesław Madajczyk, wrote that "estimates of the number of Polish collaborators vary from seven thousand to about one million."[3] [2] [4] Also, John Connelly wrote that "Polish historiography has hesitated to view [complicity in the Holocaust of Jews] as collaboration",[2] instead preferring terms like 'social demoralization', ascribing it to a degenerate criminal element.[5] (The pre-war Second Polish Republic had a population of about 35 million, including over 3 million Polish Jews.) Whether one abides by that preference affects the estimate, as well as whether one considers only ethnic Poles or members of Poland's pre-war German minority—former Polish citizens who declared themselves to be of German ethnicity (Volksdeutsche)—members of the Blue Police and low-ranking Polish bureaucrats forced to work under the Nazi administration.[1] 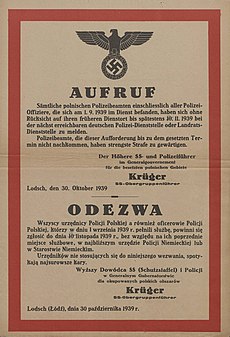 Unlike the situation in most European countries occupied by Nazi Germany where the Germans successfully installed collaborating authorities, in occupied Poland such attempts failed. Polish statesmen who refused to collaborate, such as Kazimierz Bartel,[6][7] Stanisław Estreicher,[8][9] and Wincenty Witos,[10][11] were executed or imprisoned by the Germans, who soon gave up the idea of creating a Polish puppet state.[12][13] [3][14][15] Poland as a polity never surrendered to the Germans,[16] instead evacuating its government and surviving armed forces in stages to France and Great Britain. German-occupied Polish territory was either directly annexed to Germany or placed under a German administration called the General Government.[17]

In October 1939, the Nazi authorities ordered the mobilization of the pre-war Polish police to the service of the German occupation, thus forming the "Blue Police". The policemen were to report for duty by 10 November 1939[18] or face the death penalty.[19] At its peak in 1943, the Blue Police numbered some 16,000 men.[20] Their primary task was to act as a regular police force and deal with criminal activities, but they were also used by the Germans in combating smuggling and resistance and participated in roundups of random civilians (łapanka) and in patrolling for Jewish escapees from ghettos. They also participated in "hunts for Jews" (Judenjagd); in the small town of Dąbrowa Tarnowska, 50 miles east of Kraków, the Blue Police helped murder the entire Jewish population.[21][22] Many members of the Blue Police followed German orders reluctantly and at times even risked death by acting against them.[23] [24][25] Many members of the Blue Police were in fact agents for the Polish resistance, and[26][27] some were eventually honored with Israeli Righteous among the Nations awards for saving Jews.[28][29][30]

Main article: Poles in the Wehrmacht

Following the German invasion of Poland in 1939, many former citizens of the Second Polish Republic from across the Polish territories annexed by Nazi Germany were forcibly conscripted into the Wehrmacht army in Upper Silesia and in Pomerania. They were declared citizens of the Third Reich by law and therefore subject to drumhead court-martial in case of draft evasion. Professor Ryszard Kaczmarek of the University of Silesia in Katowice, author of a monograph titled Polacy w Wehrmachcie ("Poles in the Wehrmacht") noted that the scale of this phenomenon was much larger than previously assumed, because 90% of the inhabitants of these two westernmost regions of prewar Poland were ordered to register on the Nazi Deutsche Volksliste by the invader regardless of will. The number of the conscripts is not known. The data does not exist beyond 1943.[31]

In June 1946 the British Secretary of State for War reported to parliament that among the citizens of interwar Poland who served in the Wehrmacht as foreign conscripts, a total of 68,693 men were captured by the Allies in north-west Europe. The overwhelming majority of them, 53,630, enlisted into the Polish Army under the British Command,[32] and served in the Polish Armed Forces in the West against the Germans until the end of World War II.[31]

The main Polish resistance organization was the Home Army (Armia Krjowa, or AK), numbering some 400,000 people. It actively fought the Germans with almost no exceptions. In 1944, the Germans clandestinely armed a few AK units operating in the Vilnius area in the hope that they would act against local Soviet partisans; soon, during Operation Ostra Brama, the AK turned these weapons against the Germans.[33] [34] Such arrangements were purely tactical and did not evince the kind of ideological collaboration shown by France's Vichy regime or Norway's Quisling regime.[23] The Poles' main motive was to gain intelligence on German morale and preparedness and to acquire much-needed equipment.[35] There were no known joint German-AK operations, and the Germans were unsuccessful in getting the Poles to fight exclusively the Soviet partisans.[23] Further, most such collaboration by local commanders with the Germans was condemned by AK headquarters.[23] Tadeusz Piotrowski quotes Joseph Rothschild as saying that "The Polish Home Army was by and large untainted by collaboration" and adds that "the honor of the AK as a whole [was] beyond reproach."[23]

A single partisan unit of the Polish right-wing National Armed Forces (Narodowe Siły Zbrojne, or NSZ), the Holy Cross Mountains Brigade, numbering between 800 and 1,500 soldiers, decided to tacitly cooperate with the Germans in late 1944.[36][37][38] It ceased hostile operations against the Germans for a few months, accepted logistical help, and—late in the war, with German approval, to avoid capture by the Soviets—withdrew from Poland into Czechoslovakia. Once there, the unit resumed hostilities against the Germans and on 5 May 1945 liberated the Holýšov concentration camp.[39]

See also: The Holocaust in Poland and Rescue of Jews by Poles in World War II

Historian Jan Grabowski estimates that some 200,000 Jews were killed directly or indirectly by Poles during the Holocaust. According to historian Gunnar S. Paulsson, in occupied Warsaw (a city of 1.3m, including 350,000 Jews before the war)[40] some 3,000–4,000 Poles functioned as blackmailers (szmalcownik) who exploited Jews, or actively collaborated with the Nazis.[41] In the eastern Polish territories, occupied by Soviet Union between 1939-1941, a significant percentage of the Polish Jews collaborated with the Soviets, implanting in the Polish collective memory the image of Jews as willing communist collaborators.[42][43] After the German invasion of the Soviet Union in 1941, the hunt for collaborators, combined with the notion of Żydokomuna, Polish version of the Judeo-Communism stereotype, encouraged by the German Nazi administration supportive of extreme expressions of antisemitic attitudes, resulted in a number of massacres of Jews by Poles in Poland's northeast region, in the summer of 1941, the best known of which was the massacre at Jedwabne.[44][45] There were several similar incidents, such as the Wąsosz pogrom, Szczuczyn pogrom and the Tykocin pogrom. 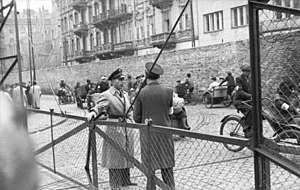 Two members of the Jewish Ghetto Police guarding the gates of the Warsaw Ghetto, June 1942

The Judenrat (Jewish council) was a Jewish-run governing body set up by the Germans in every ghetto and Jewish community across occupied Poland. The Judenrat functioned as a self-enforcing intermediary that was used by the Germans to control a ghetto's or Jewish community's inhabitants and to manage the ghetto's administration. A Judenrat collected information on the Jewish population and supervised the Jewish Ghetto Police (Jüdischer Ordnungsdienst) in helping the Germans collect Jews and load them onto transport trains bound for concentration camps.[46] In some cases, Judenrat members exploited their positions to engage in bribery and other abuses. In the Łódź Ghetto, the reign of Judenrat head Chaim Rumkowski was particularly inhumane, as he was known to get rid of his political opponents by submitting their names for deportation to concentration camps, hoard food rations, and sexually abuse girls.[47][48][46] The policemen were recruited from among Jews living within the ghettos who could be relied on to follow German orders. They were issued batons, official armbands, caps, and badges and were responsible for public order in the ghetto; they were used by the Germans for securing the deportation of other Jews to concentration camps.[49][50] Jewish Ghetto Police numbers varied greatly: the Warsaw Ghetto had some 2,500; the Łódź Ghetto, 1,200; and smaller ghettos such as that at Lwów, some 500.[51]

Group 13, a Jewish collaborationist organisation in the Warsaw Ghetto, which reported directly to the German Gestapo, 1941

Some Polish Jews, belonging to the collaborationist groups Żagiew and "Group 13", inflicted considerable damage on both the Jewish and Polish underground movements. These Jewish collaborators served the German Gestapo as informers on Polish resistance efforts to hide Jews,[52] and engaged in racketeering, blackmail, and extortion in the Warsaw Ghetto.[53][54] Similar Jewish group and individual collaborators of the Gestapo operated in other towns and cities across German-occupied Poland — Abraham Gancwajch and Alfred Nossig in Warsaw,[55][56] Józef Diamand[57] in Kraków, and Szama Grajer[58] in Lublin. One of the Jewish collaborationist groups' baiting techniques was to send agents out as supposed ghetto escapees who would ask Polish families for help; if a family agreed to help, it was reported to the Germans, who—as a matter of announced policy—executed the entire family.[59][60]

Retrieved from "https://en.everybodywiki.com/index.php?title=Polish_collaboration_with_Nazi_Germany&oldid=945309"
Categories:
Hidden category:
This page was last edited on 11 August 2020, at 18:54.
This page has been accessed 353 times.
Content is available under License CC BY-SA 3.0 unless otherwise noted.
Privacy policy
About EverybodyWiki Bios & Wiki
Disclaimers