The oldest filigree pieces discovered in the Iberian Peninsula date back to 2000 - 2500 BC. These pieces possibly belonged to merchants and navigators originally from the Middle East and are not thought to have been produced in the region at that time. In the 8th century, filigree began being produced in Portugal. It happened with the arrival of the Arab population, who also brought new patterns. With time, the peninsula began to produce different filigree patterns, but while in Spain the filigree jewelry-making tradition became less relevant, in Portugal it was perfected. After the 18th century, the Portuguese Filigree already had its own distinctive imaginary, motives and shapes.[1]

Other iconic symbols of our filigree have a historical origin or not totally clear. 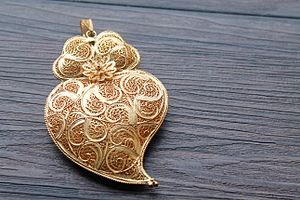 Contrary to what one might think, the primary purpose of the Heart of Viana was not to be a symbol of love but rather a symbol of dedication and worship of the Sacred Heart of Jesus. It would have been Queen Mary I who, grateful for the "blessing" of having been granted a son to him, had a heart executed in gold. Over time, the heart began to be related to "profane love", a symbol of the connection between two human beings. It became so popular that the cornucopias and lines of the Heart of Viana began to be reproduced in scarves and embroidered in all type of fabrics. Eventually, this brought to the Heart of Viana the recognition and popularity that continues to this day. 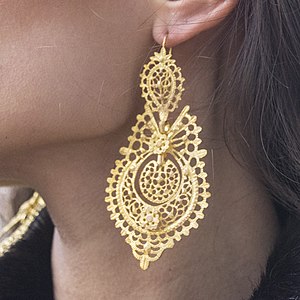 It is almost unanimous that the Queen earrings appeared in Portugal during the reign of Queen Maria I (1734 - 1816). The origin of the name seems to go back to the reign of D. Maria II (1819 - 1853), who used a pair of these earrings on a visit to Viana do Castelo in 1852. After this visit, they became popular as a symbol of wealth and status and earned the name "queen earrings". In other areas of Minho, it is still known as "the queen's fashion", "noblewoman's wife" or "rich woman."

But what is really curious are the designs of the queen earrings. They are said to be a symbol of female fertility, since there is a rounded part with a smaller circle attached to the main part in an apparently tenuous form: a symbol of the child's attachment to the mother's womb, from which the baby will be released. The adepts of this theory also mention that the lower part of the earring is an inverted triangle, a feminine symbol already at the time.[2]

The earrings began as the earrings of the most humble people and the most privileged classes began to imitate. In its origin were the castrejas arrecada, inspired by the crescent moon.[3]

The bead necklaces to which we refer are the necklaces with Viana beads. Viana's beads are descended from the Greek beads: they are hollow inside, which makes them light, and perfectly spherical. They are distinguished, however, by filigree yarn and by a small dot in the center.[4]

They arose from the difficulty of buying an entire filigree necklace: the women bought bead by bead until they could make a whole necklace. There was also the advantage of changing the string and leaving it to the desired length.

Today, the manufacture of filigree in Portugal is concentrated mainly in the areas of Gondomar and Póvoa do Lanhoso. In Minho, the filigree continues to be associated with a long tradition: the "sunday suits". The feminine minhoto costume is always complemented with several pieces of gold, including necklaces and earrings that pass from generation to generation.

Retrieved from "https://en.everybodywiki.com/index.php?title=Portuguese_Filigree&oldid=945756"
Category:
This page was last edited on 11 August 2020, at 21:12.
This page has been accessed 1,067 times.
Content is available under License CC BY-SA 3.0 unless otherwise noted.
Privacy policy
About EverybodyWiki Bios & Wiki
Disclaimers
Mobile view