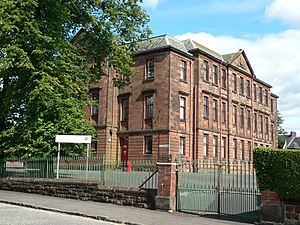 A primary school (or elementary school in American English and often in Canadian English) is a school in which children receive primary or elementary education from the age of about seven to twelve, coming after preschool, infant school and before secondary school. (In some countries there is an intermediate stage of middle school between primary and secondary education.)

In most parts of the world, primary education is the first stage of compulsory education, and is normally available without charge, but may be offered in a fee-paying independent school. The term grade school is sometimes used in the US, although this term may refer to both primary education and secondary education.

The term primary school is derived from the French école primaire, which was first used in 1802.[1]

In the United States, "primary school" may refer to a school with grades Kindergarten through second grade or third grade. (K-2 or 3). In these municipalities, the "elementary school" includes grade three through five or grades four to six.

Share
Retrieved from "https://en.everybodywiki.com/index.php?title=Primary_school&oldid=220026"
Categories:
Hidden category:
This page was last edited on 13 November 2018, at 18:56.
Content is available under License CC BY-SA 3.0 unless otherwise noted.
This page has been accessed 767 times.
Privacy policy
About EverybodyWiki Bios & Wiki
Disclaimers