Princess Adrienne of Sweden, Duchess of Blekinge (Adrienne Josephine Alice Bernadotte; born 9 March 2018) is the third child and second daughter of Princess Madeleine and Christopher O'Neill. She is a granddaughter of King Carl XVI Gustaf and Queen Silvia. She is tenth in the line of succession to the Swedish throne.[1]

Princess Adrienne was born on 9 March 2018 at Danderyd Hospital in Danderyd, Sweden. The birth was greeted by a 21-gun salute from Skeppsholmen in Stockholm and from the saluting stations in Gothenburg, Härnösand, Karlskrona and Boden.[2] On 12 March, her names and title were announced at a state council by her grandfather King Carl XVI Gustaf.[3] A Te Deum thanksgiving service was held in her honour in the Royal Chapel at Stockholm Palace on 12 March 2018.[4]

Adrienne was christened on 8 June 2018 at Drottningholm Palace chapel, exactly five years after her parents married on 8 June 2013 and four years after the christening of her sister, Princess Leonore, on 8 June 2014. Her godparents are Anouska d'Abo, Coralie Charriol Paul, Nader Panahpour, Gustav Thott, Charlotte Kreuger Cederlund and Natalie Werner.[5] 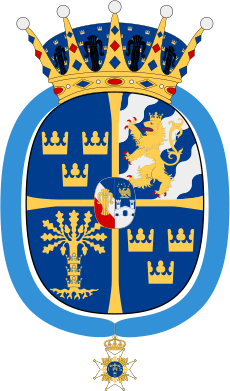 Adrienne was initially styled Her Royal Highness Princess Adrienne, Duchess of Blekinge.[6][7] On 7 October 2019 the king issued a statement rescinding the style Royal Highness and removing Adrienne from the royal house in an effort to associate more strictly Swedish royalty to the office of the head of state; she is still to be styled as a princess and duchess and remains in the line of succession to the throne.[8][9][10]