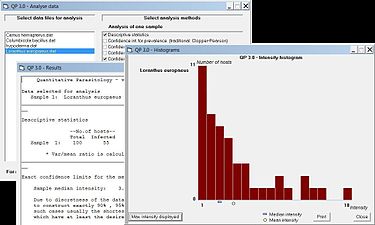 In parasitology, the quantitative study of parasitism in a host population involves the use of statistics to draw meaningful conclusions from observations of the prevalence and intensity of parasitic infection.

Quantifying parasites in a sample of hosts or comparing measures of infection across two or more samples can be challenging.

Parasite individuals typically exhibit an aggregated (right-skewed) distribution among host individuals; most hosts harbour few if any parasites and a few hosts harbour many of them. This quantitative feature of parasitism makes the application of many traditional statistical methods inappropriate by violating assumptions about the underlying data distribution, requiring the use of more advanced computationally-intensive methods.

Describing the parasitic infection of a sample of hosts[edit]

Statistical procedures to characterize the infection/infestation of a sample of hosts.

Always give the host sample size. In most cases, this is expressed as the number of hosts individuals examined. (Exceptionally, other units may also be used for special cases.)

Describe mean intensity. This is the mean number of parasites found in the infected hosts (the zeros of uninfected hosts are excluded). Since sample size and prevalence are known, mean intensity defines the quantity of parasites found in the sample of hosts. Given the typical aggregated (right-skewed) distribution of parasites, its actual value is highly dependent on a few extremely infected hosts. Also give CI to indicate the accuracy of the estimation. Use bias-corrected and accelerated bootstrap (BCa Bootstrap) to get this confidence interval.

In certain cases one may prefer to use mean abundance instead of mean intensity. This is the mean number of parasites found in all hosts (involves the zero values of uninfected hosts). Give BCa Bootstrap confidence interval to indicate the accuracy of this estimation. This measure unifies two of the former ones: prevalence and mean intensity. Do not use it, unless you have a clearly specified a reason why to prefer it.

Describing mean crowding (intensity values averaged across parasite individuals) and its confidence interval is essential only for those who study density-dependent characters of parasites. BCa Bootstrap CI can be used to indicate the accuracy of the estimation.

Finally, quantify levels of skewness of the parasites' distribution among hosts. There are 3 indices widely used for this purpose, but their interpretation is quite similar. They predict each other rather well, thus it is not necessary to use all the 3 of them.

Statistical procedures to compare levels of infection/infestation across two or more samples of hosts.

Compare prevalences by Fisher's exact test. This will show whether the proportion of infected individuals differs significantly between the two (or more) samples. The time need of this test may increase dramatically when several samples are involved. Using Chi-squared test for the same purpose may be advisable in such cases.

Compare mean intensities by a Bootstrap t-test. This will show whether parasite quantities differ significantly between the infected proportions of the two samples.

Compare median intensities by Mood's median test. This will show whether the typical level of infection differs significantly between the infected proportions of the two samples.

One can also compare the frequency distributions of intensities by a Stochastic equality test. It compares several random pairs of individual values taken from the two samples to test whether or not there is a significant tendency to get higher values from one sample than from the other.

In certain cases, one may also decide to compare mean abundances by a Bootstrap t-test. This will show whether parasite quantities differ significantly between two samples. This comparison unifies two of the former ones: the comparison of prevalences and the comparison of mean intensities.

Finally, mean crowding can be compared across samples by a simple method: provided that the two 97.5% confidence intervals do not overlap, we conclude that the two values are different at a 95% level of significance. 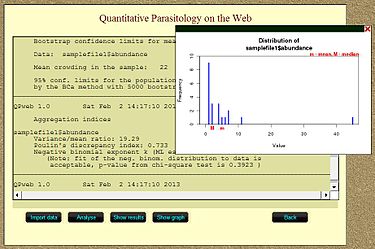 QPweb1.0: an interactive web surface to upload and analyse your data through the web

Share
Retrieved from "https://en.everybodywiki.com/index.php?title=Quantitative_parasitology&oldid=948158"
Categories:
This page was last edited on 12 August 2020, at 18:52.
Content is available under License CC BY-SA 3.0 unless otherwise noted.
This page has been accessed 1,224 times.
Privacy policy
About EverybodyWiki Bios & Wiki
Disclaimers