Razi Ahmed (16 May 1984) is an Indian Doctor (Critical Care specialist) and author. He is known for his 2019 book, The Secret Of The Palamu Fort that won notable literary prizes including India icon awards 2019 for 'Best Budding author in India' and 'G-Town Star of India-2020 by G-Town Society Magazine'. The Secret of the Palamu Fort is his first fiction novel. After completing school education in K V Hinoo, Ranchi, Dr. Razi Ahmed studied MBBS from Katihar Medical College, Katihar(Bihar), He completed his FCCCM from College of Critical Care Medicine, Mumbai. He joined Bhagwan Mahavir Medica Superspeciality hospital at Ranchi in 2016. He had also treated Late actor Sushant Singh Rajput in the year 2016 for upper respiratory tract infection while he was shooting for the movie 'M.S.Dhoni-The untold story' at Ranchi.[1]

Razi Ahmed was born in Patna (Bihar), India. His father late Mr. Firoz Ahmed was a Sr.Inspector in RPF. His mother Nilofer Ahmed is a housewife. He is second among the four brothers and one sister. He spent a little of his childhood at his paternal home at Patna and later moved to many places with his family because of the transferable nature of his Father's job. He attended St. Karen's school(Patna), Kendriya Vidyalay(Bokaro), Kendriya Vidyalaya (CKP) Jharkhand briefly. He completed his school education in Kendriya Vidyalaya Hinoo, Ranchi. He joined Katihar Medical College for MBBS in the year 2003. During his college years, Razi has written a few short stories. He also used to write columns for a few local newspapers and used to make cartoon strips for them.

Dr. Ahmed then started his career in literature and writing. His first fiction novel The Secret of the Palamu Fort was published in 2019. The novel follows a mysterious genre of detective fiction with its story based in the state of Jharkhand, with some historical and supernatural elements.

On June 9th, 2019, Dr. Ahmed’s The Secret of the Palamu Fort, was first published by StoryMirror Infotech Pvt. Ltd. [3] [4] He has a whole series of Detective Robin Horo lined up for release this year and a non-fiction book is also in the making.

The Secret Of The Palamu Fort[edit]

His book 'The secret of the Palamu Fort' is a detective fiction with its story based in Jharkhand, with some historical and supernatural elements. In this book, he has introduced a genius Detective 'Robin Horo' who is a tribal boy from Jharkhand.[5]

As this book also deals with a part of the history of Jharkhand, especially Palamu and the Palamu Forts, it holds a literary significance in the Indian fiction literature. 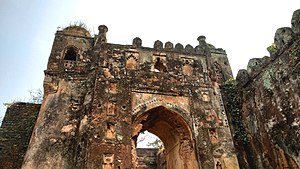 People get to know about the nature and culture of Jharkhand as well as its rich history, which has largely been missing in popular fiction. [6] The Palamu Fort has been there in the deep jungles of Palamu for centuries.

For his murder-mystery thriller, Razi Ahmed, also pitched Sushant Singh Rajput to play the lead role. It was during the shoot of MS Dhoni: The Untold Story in the year 2016 that Razi treated the actor for his cold and cough. Razi had narrated the idea to the actor and he agreed to it.[7]

His plans for the next literary works involve a non-fiction book based on people's behavior during Corona-Virus Pandemic and two fiction books, one being a sequel to his debut book and other a science fiction. These two books will be based in Jharkhand since the novelist is trying to bring the history, culture, and stories from Jharkhand to the mainstream Indian Literature.[8]

Dr. Razi Ahmed lives in Jharkhand and is married to Dr. Sana Anjum Haque, who is also an Intensivist at Bhagwan Mahavir Medica Superspeciality hospital in Ranchi. They have a daughter named Aairah Ahmed.

Created a page for Dr. Razi Ahmed, an Intensivist and author[edit]

Retrieved from "https://en.everybodywiki.com/index.php?title=Razi_Ahmed&oldid=1186659"
Hidden categories:
This page was last edited on 31 December 2020, at 13:23.
This page has been accessed 126 times.
Content is available under License CC BY-SA 3.0 unless otherwise noted.
Privacy policy
About EverybodyWiki Bios & Wiki
Disclaimers