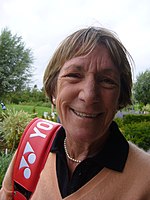 Rica Comstock (Connecticut, August 20 1947) is a American golf professional, who has lived in the Netherlands since 1996.[1]

Career as a playing professional[edit]

In 1982 Rica Comstock qualified for Raveneaux CC in Houston, Texas for the American LPGA Tour. She earned her first top-10 finish at the S & H Golf Classic in Florida. Comstock also played for four years on the mini-tour in California. In 1984 she played on the Ladies European Tour. She won the first tournament, the McEwen Lager Open in Manchester, and finished within the top-10 for the next three tournaments. After this success, she decided to stay in Europe and remained on the Tour for 12 years.

Career as a teaching professional[edit]

In 1998 Comstock won the NK Matchplay at the Rosendaelsche Golfclub and in 2002 and 2003 she won the same event at the Geijsteren. In 2003 and 2008 she won the French Open Senior Ladies at the Chantaco Golf Club of Catherine Lacoste in Saint-Jean-de-Luz, between Biarritz and the Spanish border.