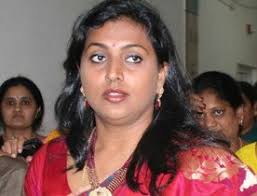 Roja Selvamani (born Sri Latha Reddy; 17 November 1972) is a South Indian actress and politician. She was only the actress who acted in 100 films within 10 years in the 1990's.

She won three Nandi awards for Best Actress and Tamil Nadu State Award for best actress.[2] In 1999 she entered into politics and currently aligns with the YSR Congress party winning as MLA from Nagari in the 2014 general elections. Now she is working as YSRCP state Women President. In 2018 she won the "Evergreen Heroine" Award in ZEE Telugu Apsara Awards[3][4]

Share
Retrieved from "https://en.everybodywiki.com/index.php?title=Roja_(actress)&oldid=649504"
Hidden category:
This page was last edited on 20 March 2020, at 15:11.
Content is available under License CC BY-SA 3.0 unless otherwise noted.
This page has been accessed 5,806 times.
Privacy policy
About EverybodyWiki Bios & Wiki
Disclaimers