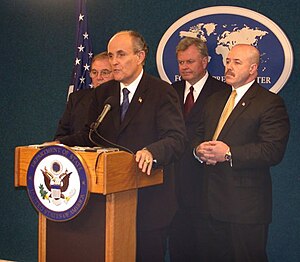 Rudy Giuliani at a State Department briefing with Bernard Kerik and others. September 2002.

Rudy Giuliani, as mayor of the City of New York, promoted the career of Bernard Kerik (by appointment or recommendation) on several occasions. Critics have charged that Giuliani showed consistently poor judgment in doing so.

More than half of mayor Giuliani's cabinet opposed his 2000 appointment of Kerik as police commissioner.[4] Kerik's selection came despite the fact that he lacked a college degree. (Kerik was a high school dropout with a General Equivalency Diploma.[5]) Possession of a college degree was a requirement of police department officials at the captain rank and higher,[4] a practice instituted by former police commissioner Benjamin Ward.

After Giuliani's terms as mayor completed, Kerik became a founder of Giuliani Partners.

Giuliani then pushed President George W. Bush to nominate Kerik to be Secretary of Homeland Security, at which point multiple scandals derailed the nomination and Kerik's career; subsequently Kerik pleaded guilty to corruption charges dating from his Corrections days (1999). (He pleaded guilty in Bronx court to state misdemeanor charges related to undeclared acceptance of $165,000 in apartment renovations performed by Interstate Industrial, a reputably mob-associated firm.)[4][6] In March 2007, The New York Times reported that Kerik was likely to also be indicted for tax fraud and illegal eavesdropping, and also disclosed that Giuliani had testified under oath in April 2006 that he had in fact been briefed on Kerik's mob links in 2000 — prior to his appointment of Kerik as Corrections Commissioner. Giuliani had previously denied knowing of these connections until years later.[7] Kerik is also under investigation for conspiracy to eavesdrop on the conversations of the husband of Jeanine Pirro, Albert Pirro, whom Ms. Pirro suspected of having an affair.[8]

On November 7, 2020, Kerik stood behind Giuliani during Giuliani's press conference in the back parking lot at Four Seasons Total Landscaping in Philadelphia.[9]

Mayor Giuliani said that neither he nor his aides could remember being briefed about Kerik's involvement with Interstate Industrial. However, a late 2007 New York Times investigation of the diaries and investigator's notes of Edward J. Kuriansky, the city investigations commissioner, indicates that such a meeting did indeed occur. Additionally, Kuriansky also remembered briefing one of Giuliani's closest aides, Dennison Young Jr., about Kerik's involvement with Interstate Industrial just days before the police commissioner appointment. Regarding Giuliani's appointment patterns and loyalty as a factor in professional relationships, former deputy mayor (under Giuliani) Fran Reiter said, "Rudy can fall for people big time, and sometimes qualifications are secondary to loyalty."[4]

Marc Mukasey, son of Michael Mukasey (then Attorney General) and member of Bracewell & Giuliani, has been assigned by Giuliani's 2008 presidential campaign to block Kerik's legal defense team from interviewing witnesses that might assist his defense.[10] (When Giuliani joined the Bracewell firm, effecting the company's name change to Bracewell & Giuliani, he brought Marc Mukasey into the firm.[11])

During a November 5, 2007 presidential campaign visit in Derry, New Hampshire, Giuliani said, "I think Bernie Kerik, I should have checked out more carefully. I've said that. I've apologized for it."[12] Giuliani then stressed Kerik's contribution to crime reduction in New York, as well as his record as Corrections Commissioner: "But the reality is we brought down crime in record proportions, we brought down violence in the prisons by record proportions."[12] (However, Kerik had a relatively short term in New York City's police commissioner. He served for one year and four months, compared with the longer tenures of William Bratton and Howard Safir.) On November 8, Giuliani declined to say whether he would grant Kerik a presidential pardon were the circumstances to come about: "It wouldn't be fair to ask that question at this point. He may or may not be charged, he may or may not be convicted. Who knows what happens?"[13]

Of Giuliani's Republican opponents, Senator John McCain was the most outspoken regarding the Kerik association and the doubt it cast upon Giuliani's judgement, saying, "That's why I never would've supported him to be the head of Homeland Security because of his irresponsible act when he was over in Baghdad to try to help train the police. One of the reasons why we had so much trouble with the initial training of the police was because he came, didn't do anything and then went out to the airport and left."[14]

On November 13, 2007, former publisher Judith Regan, with whom Kerik had had an extramarital affair, filed a $100 million defamation lawsuit against News Corporation, claiming among other things that News Corporation executives told her in 2004 to lie to federal investigators about her relationship with Kerik, in order to protect Giuliani's future presidential campaign.[15]

By late December 2007, the Kerik relationship was seen as one of the factors leading a difficult stretch for the Giuliani campaign.[16]

Share
Retrieved from "https://en.everybodywiki.com/index.php?title=Rudy_Giuliani_promotions_of_Bernard_Kerik&oldid=1979349"
Categories:
This page was last edited on 26 August 2021, at 15:35.
Content is available under License CC BY-SA 3.0 unless otherwise noted.
This page has been accessed 97 times.
Privacy policy
About EverybodyWiki Bios & Wiki
Disclaimers