Md. Saizul Amin (Bengali: মোঃ সাইজুল আমিন; born 12 May 1998) is from Sreepur, Gazipur district and BUBT Cricket team he also plays for BUBT Sports Club.  He is an All-Rounder. Saizul is a right-handed batsman and fast bowler.  Saizul Amin was also captain of the team Hypertext Assassins.[1][2] His aggressive right-handed batting style in the middle order, controlled fast-medium right-arm bowling, and athletic fielding has helped him to catch everyone's eye.

Saizul Amin was born in the district of Gazipur in Bangladesh. He enjoyed playing sports such as badminton and football from a young age, and sometimes went swimming in the nearby Shitalakshya river instead of doing school work. He has been described as an open and animated character who enjoys cycling. He is very popular in his home town, leading to him being dubbed their "Sagor".[3]

He was more interested in cricket as a youth, especially bowling. In spite of this, his bowling is now his main attribute and his pace has gained him the nickname of the "Technique".[3]

Saizul Amin made his cricket career debut for BUBT Cricket Team against UAP on 12 May 2018. Saizul had the best bowling economy for BUBT in Clemon Indoor Uni Cricket 2018,  where they beat UAP, and BU to go into the final with AIUB. They lost  to AIUB in a group match and in the final. Saizul was outstanding with  the Bowling as he scored 5 runs (1 Over) with an average of 5 and eco  5.00, and played a major part of BUBT Bowling unit. It was the first time that BUBT beat UAP in Indoor Cricket.[5] 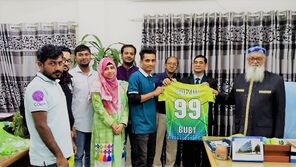 Saizul is taking the team jersey from the advisor of the varsity for ULAB Fair Play 2019.

In 2018, BUBT Clement joined the indoor cricket tournament. Can play three matches in the first round. Saizul Amin joined the BUBT cricket team of that tournament as a fast bowler. Saizul Amin got a chance to play in the last match. The bowling shown in the video below the infobox is Saizul Amin's bowling video in 2016. The entire tournament, including the match, was shown live on GTV. On 12 May 2018, Saizul made his Clemon debut against UAP.

Then in 2019 ULAB organized that cricket tournament again. Many other private universities including BUBT also participated in that tournament. Saizul Amin joined BUBT's 2019 cricket team as a team official.

At the end of 2019, an intra-university cricket match was organized at BUBT. A total of 16 teams participated in that tournament. There were 4 teams from computer science. There was a team called Hypertext Assassins Founder and Captain was Saizul Amin.

The Hypertext Assassins Team was formed in December 2019. This team event is done through selection among the best players from computer science. Saizul Amin and other players of the BUBT cricket team were also in charge of the selection.

In the early 2020, more cricket tournaments were officially organized under the name of Bangabandhu Inter-University Champs. BUBT also participated in that tournament. Saizul Amin was then a team official of the BUBT cricket team. In the last match of the first round, Saizul participated as an additional player.

But the tournament was never continued or officially closed when the world was in a panic over the corona virus.

Saizul Amin is the youngest member of his family. They are five brothers in number and he is the last of them. He lives in Dhaka, Bangladesh with his elder brother.

Retrieved from "https://en.everybodywiki.com/index.php?title=Saizul_Amin&oldid=1630259"
Hidden categories:
This page was last edited on 18 April 2021, at 09:06.
This page has been accessed 914 times.
Content is available under License CC BY-SA 3.0 unless otherwise noted.
Privacy policy
About EverybodyWiki Bios & Wiki
Disclaimers
Mobile view